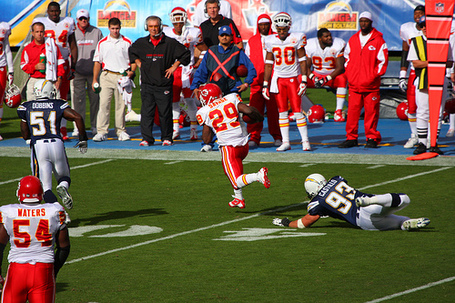 Good Morning AP! Game Day! As last night's booze is slowly replaced by this morning's coffee, I wanted to remind everyone of Dantrell Savage. His name has not been mentioned enough going into today's game. With the increased load on Charles, I'm wondering who will be taking the kick offs. Remember, Savage had a 53 yard return last year.

Holy crap! Just linked to an article about Pollard and he has not nice things to say about Haley. Be sure to look at the last article before the Tweets start.

For a football team with as many holes in its 53-man roster as the Chiefs, Sunday is a very important day.

When the Chiefs take the field against the Jaguars at Jacksonville Municipal Stadium they will have two new starters, one on offense, one on defense. What RB Jamaal Charles and FS DaJuan Morgan produce with the opportunity given them will go a long way to helping Pioli/Haley as they make plans for the 2010 off-season.

Running back and safety are two areas where the Chiefs need help looking to the future. Of course, they also need help on the offensive line, defensive line, linebacker, wide receiver and tight end. Possibly only cornerback, quarterback, kicker and punter would go to the bottom of the list.

If Charles and Morgan can be productive players, and show the Chiefs they can step into their roles on offense and defense and not be – as Todd Haley calls it – yo-yo players, then running back and safety can drop down on the list of needs, allowing the Chiefs to prioritize at other positions.

The Chiefs could be poised for one of their better offensive games of the season because the Jaguars have some weaknesses defensively. Cassel should have more time to throw, running lanes for Charles and Smith could be more prevalent, and it will be a disappointment if the Chiefs don’t score more than they have in the past couple of games. If they can slow Jones-Drew and eliminate turnovers, it’s a winnable game. Prediction: Chiefs 23, Jaguars 20.

It’s become more and more apparent that Jacksonville and the so-called First Coast area of Florida is not big enough, or willing enough to support the Jaguars franchise they were given in 1995. Sunday’s game is blacked-out in northern Florida, the sixth time in six pre-season and regular season games that the Jaguars were unable to sell enough seats for home television.

The franchise didn’t even ask for an extension this week because they knew there was no way they would sell enough tickets. Reports out of Jacksonville have set the over/under attendance line at 40,000 for this game, and a lot of folks are picking the under.

And this despite the fact the team has lowered the number of seats it will sell, thus bringing down the threshold on blackout limits. Here’s how the system works: Each year, teams must turn into the league office what is called a manifest which designates the number of seats it is selling and their price. Any team can place a number less than the capacity of its stadium. The Chiefs have done that this year for Arrowhead. Now, what that number is remains a closely guarded secret in the organization. But if you wonder why the Chiefs have not had any blackouts when they obviously have plenty of empty seats and tickets available, one of the factors is them altering their capacity on the manifest.

What If They Held An NFL Game And Nobody Came? from Bob Gretz

The most tempting new trap in the NFL is free, attractive and alarmingly simple. Futures are promised and careers are threatened, all in 140 characters or less.

As the league, its teams and hundreds of players adjust to the newest trend in technology and fan connection, they’re all learning at the same time that Twitter and other social networking sites are the league’s newest Venus fly trap: come on in and get comfortable — but know that there are consequences.

Bobby Wade is a Chiefs wide receiver. His marketing man advised him last month to start a Twitter account. Said it’d be good for his future. Wade is 28, and he knows an NFL player’s career can end any time. He heard that social networking might offer him exposure. He might want to do radio or television someday. It’s nice to have options.

To no one’s surprise, the Chiefs activated running back Kolby Smith off an injured list. Smith will play in today’s game against the Jaguars.

Smith hasn’t played in a game since injuring his knee in a November game last year against Tampa Bay. But he could play a key role today.

Three most important things for the Jaguars on defense:

1. Pressure Matt Cassel. Everyone else has. The Jaguars pass rush has been downright awful, but the Chiefs have allowed 27 sacks in just seven games. Matt Cassel hasn't been good under pressure, and if the Jags can make him uncomfortable, he should struggle.

2. Win third down. Kansas City is converting on just 21% of their third downs this season. Don't let that change.

3. Blanket Dwayne Bowe. Bowe is the Chiefs best play-maker and really the only player that should be on the Jags defensive radar.

The Jaguars were 3-4 at this same point last year, then won just two games the rest of the season. The schedule gets significantly tougher in the second half this year, so the Jaguars need to toughen up considerably on defense or risk adding to three blowout losses they’ve already accumulated.

Jaguars midseason report card: Only constant is inconsistency from Jacksonville.com

Now that the NFL has reached its halfway point in the season, Las Vegas bookmakers released their latest odds for which teams they think have the best chance of making it to the Super Bowl. Kansas City Chiefs fans won’t be very surprised to learn that Vegas believes that the team is the longest of long shots to get to the Championship game.

The Chiefs, along with four other sad sack teams, have 1000/1 odds of making it to the Super Bowl and most of us that have watched this team over the first seven game probably think that’s too low.

Surprise! Las Vegas odds makers don’t think much of the Chiefs from Examiner.com

Quarterback Len Dawson came off the bench after a five-week absence and revived the offense, while kicker Jan Stenerud did the heavy legwork with five field goals as the Chiefs moved into first place with a 29-7 win at Buffalo.

The Chiefs trailed upset-minded Buffalo 7-3 at halftime and 7-6 after three quarters before erupting for 23 unanswered points in the fourth quarter on three more field goals by Stenerud and touchdown runs of 34 and 4 yards by Mike Garrett on the rain-soaked War Memorial Stadium turf.

With their fifth straight victory, the Chiefs, 7-1, took a half-game lead over Oakland in the AFL’s Western Division. Buffalo fell to 2-6.

Pollard, 24, who played at South Side and Purdue, said he doesn’t know why he was cut by the Chiefs, who took him in the second round in 2006. He implied there might have been a personality conflict with K.C.’s new regime of general manager Scott Pioli and coach Todd Haley.

"I respect others because that’s what I want in return. It was shocking to get let go, but I’m a Texan, and I’m happy to be one."

almighty31 i really do tweet. im ready for tomorrow

SI_PeterKing I'll be watching Kolby Smith very carefully Sunday in Jax. I wonder if he has a big day if it'll influence KC's LJ decision.

JoshLooney Goss, cassel, vrabel, mays, brown, ryan off top of my head RT @danloving: Do any of the Chiefs' offseason acquisitions remain?

Adam_Schefter A top 3 pick. RT @tab42: AS, if you are watching the OK/Neb game keep your peepers on Ndamukong Suh. He’s a dancing 302lbs Baryshnikov.

mighty_jeff: After the #Ducks game today, I NEED a #Chiefs win tomorrow! NEED IT!

blondielpn80: @80bobbywade If you wouldn't say it in front of a pastor/grandmother don't say it on twitter and you will be fine :-) Go Chiefs! :-)

the_manxome_foe: My mom told me she won't watch the Chiefs anymore cause they broke her heart. If football is a bad relationship, what about my parents?

sargewanz: sitting on a freezing bus on my way to the Chiefs game. Go Chiefs! maybe i will get to meet Matt Cassel!

CZOverton: Going To Jacksonville Municipal Stadium To Watch My Chiefs Play The Jaguars!!! I Will TXT Updates From The Game!!!