The Return of Two Chiefs Means Roster Moves are Coming

Share All sharing options for: The Return of Two Chiefs Means Roster Moves are Coming 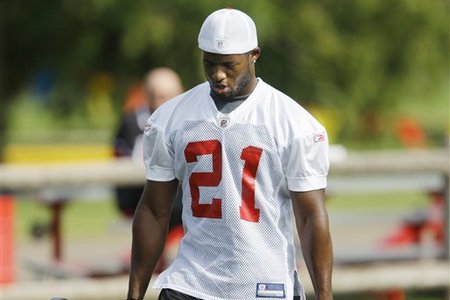 (Update 4:48 PM: One of these roster moves happened this afternoon)

The Kansas City Chiefs have a couple of roster moves coming this week.  One player will likely be coming off the PUP list today and another comes back from suspension on Monday

Kolby Smith back from PUP?

We expect the Chiefs to activate Kolby Smith for Sunday's game against the Jacksonville Jaguars.

Smith has been on the Physically Unable to Perform list after falling to a season ending injury last season.  He hasn't played in a game since injuring his knee November 2nd, 2008 against the Tampa Bay Buccaneers.  The Chiefs placed him on the PUP list at the beginning of the season which means he was inactive for the first six games.  After that, he was allowed to practice with the team and the Chiefs have three weeks from that day (two weeks ago) to activate him.

It's widely presumed he will be activated today since that's the deadline for him to be available on Sunday.  On his Twitter account yesterday, Smith said, "Feeling like Ice Cube, today was a good day."  Maybe he was told he would be activated today?

With Smith's activation, a member of the active roster will have to be released.

The Chiefs signed are currently at 53 players not counting Larry Johnson, who returns from suspension on Monday.  The Chiefs were given an extra roster spot during his suspension.

When LJ returns, the Chiefs will either have to release him outright or activate him and release another player to make room for him.

Anyone have any guesses on who the Chiefs might release to make room for these two players?