Share All sharing options for: Chiefs SS DaJuan Morgan Likely to Get His First NFL Start at FS 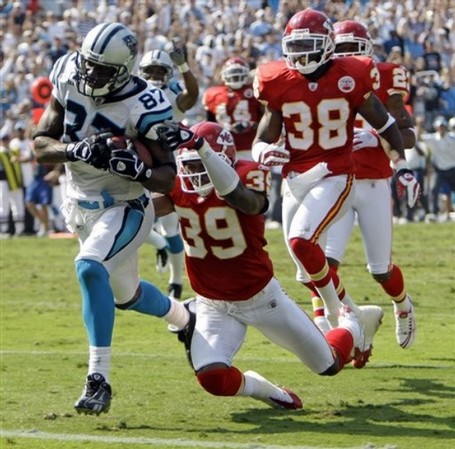 Kansas City Chiefs safety DaJuan Morgan was a Herm Edwards draft pick in 2008 and, after an injury-plagued rookie season, drew the ire of many fans who quickly labeled him a bust.  And who could blame us?  Edwards picks weren't being shown any preferential treatment (in fact, maybe the opposite) so he was a candidate to be cut in many of our minds.

Well, he's trying to change that.

The way the stars are aligning, it appears Morgan will get his first NFL start this weekend with a 'doubtful' Jon McGraw likely to see very little playing time, even more likely not to play at all.

Back in the preseason, pre-Bernard Pollard cut, a big topic of conversation around here was who will be cut: Morgan, Pollard or Mike Brown.  They play the same position and it was becoming clear that the Chiefs wouldn't keep three strong safeties.

I was near certain that Morgan would be the odd man out - until he had a heck of a performance against the St. Louis Rams in the final preseason game.

"I don’t have fear with him playing," Chiefs coach Todd Haley said yesterday. "I think when DaJuan was in there in the preseason he’s done a pretty good job. He had an interception in the St. Louis game. He has a nose for the football.

He was all over the field in that game accumulating eight tackles and an interception.  Here's what I said back then after the game:

"Then, the second year safety goes out and makes eight tackles and a diving interception.  He saw plenty of playing time, which to me means that the coaching staff wanted to give him a good chance to win a spot on the team.

"He may have done just that last night."

I was right...sorta.  Morgan's spot on the team may have been more of a result of Pollard than his own play since, frankly, he had shown very little in game action, but that doesn't matter now.  He's on the team and getting a shot to start, even if it isn't at his true position.

"He had a good week of practice along with the other guys," Haley said of Morgan. "I wouldn’t say that I have any fear with him being back there. I think he’s ready to go. He’s got good speed, good ball skills, he’s a good tackler and I think he understands what we’re trying to do. Again, I think he’s much like a couple of the other guys who are getting a real opportunity this week."

Back in the Morgan/Pollard/Brown debate, I cited Brown's leadership skills and the idea of him being the "quarterback of the defense" as a reason why he'll make the team.  I think that is still to this day a major reason he was brought on board.

"Yeah, they’ve got to quarterback the defense," Haley said. "Mike Brown does a great job of that (and) I think he’ll take some of the pressure off of DaJuan in that area. He still has to communicate and know what’s going on which, again, I feel comfortable with where he’s at.

"I think a lot of it is experience and just relaxing and not getting too hyped up. The time he’s been in games – and most of his play-time came in the pre-season – I think he showed very good progress and I think he’s excited about the opportunity."