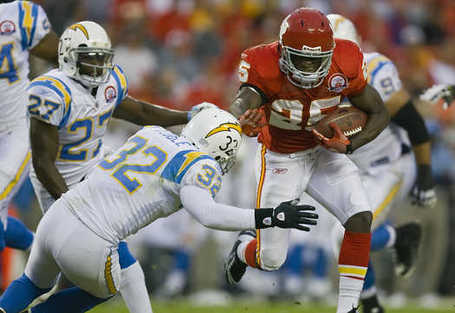 Losers assemble in small groups and complain about the coaches and other players. Winners assemble as a team and find ways to win.

Nothing earth shattering there, but for some reason it has created a maelstrom with the pundit class. Words like stupid, childish, clownish, distraction have all been thrown out in reaction to those words.

And the reaction has more to do with those screaming than it does with the sign itself, or the people who hung it on the wall.

It doesn’t take injuries to a couple of veteran safeties to summon visions of long touchdown runs by Jacksonville’s Maurice Jones-Drew against the Chiefs on Sunday.

The Chiefs already were capable of allowing long runs with Jarrad Page or Jon McGraw in their starting lineup. They’ve allowed a run of more than 35 yards in each of the past three games.

But the odds that the elusive Jones-Drew, one of the league’s rushing leaders, could burn the Chiefs in Jacksonville seem to improve because neither Page nor McGraw will play.

Long forgotten by seemingly everyone but the Chiefs since he injured his knee midway through last season, Kolby Smith will play for the first time in more than a year in Sunday’s game against the Jaguars in Jacksonville.

Smith started nine games during his first two seasons with the Chiefs. He was their featured back for a time as a rookie in 2007 after injuries knocked out Johnson and Priest Holmes.

Smith had a 150-yard, two-touchdown game against Oakland that season.

It was a remarkable day in Buffalo on November 6, 1960 for Walt Corey.

Little did he know that many years later, he would enjoy many wonderful Sunday afternoon’s in western New York as the defensive coordinator of the Buffalo Bills from 1987 through 1994 with four consecutive trips to the Super Bowl.

But in the first season of the American Football League, Corey led a tough Dallas Texans defense in a 45-28 pasting of the Bills on a Sunday with cold temperatures and a biting wind from the north.

Kansas City is coming off their bye week.  The last game they played was not pretty as they were beaten badly by the San Diego Charges, 37-7.  That is the game that prompted the off field actions of suspended running back Larry Johnson.

Chiefs In The Sunshine State from Missourinet

Then add teammate and former Chiefs quarterback Trent Green as your passing instructor and current Chiefs wide receiver Bobby Engram teaching you how to run routes.

It’s been the reality for more than two dozen 10-year-old boys playing for the Blue Valley West Jaguars team of the Football & Cheerleading Club of Johnson County. Gammon, Green and Engram’s sons all play on the team.

Love 'em or leave 'em, it is apparent that social networking sites such as Twitter and Facebook have added a compelling, instant dimension to following and connecting with NFL players — as with celebrities at large, media personalties or the guy next door.

"I'm on there, 24/7," Ochocinco, who has more than 350,000 followers on Twitter and has posted more than 10,000 tweets, told me via an old-school communication tool — the telephone. "It gives me a voice, the ability to reach people directly and for people to see who I am without the filter of the media, the critics or whomever.

"And people wouldn't have any other way to get to me directly. That's why social networking is so dangerous."

On the other hand, we've learned that tweets can also blossom into a heap of trouble.

The Bell Tolls: Twitter a Boon and a Burden for Savvy NFL'ers from USA Today

It seems like a long time ago, but once upon a time when the Kansas City Chiefs were a competitive bunch, Pellom McDaniels was a key part of a strong defensive line. But now, the former defensive end has a new job title: history professor.

FOX 4's Rob Low sat down with McDaniels, who is now a professor at UMKC and a well-known leader in the community.

MyStory: Ex-Chief Goes from Huddle to the Classroom Video from Fox4KC

JWilliams48 Chillin in my bed talk to me world

ToonIcon "My way of joking is to tell the truth. That's the funniest joke in the world."-Muhammed Ali

JoshLooney Savage could get a shot/but 2X duty for JC could happen RT @NICKx84: do we know who is going to be handling the KR w/ jamal starting at HB?

JoshLooney Love the lamar mojo! RT @bemonteer: Lamar Hunt loved the white on white look. Im willing to be our record is better on road w white on white

AlishaOnline: My weekend: filled with friends, the fair, an airshow and some Chiefs football! And I am not even leaving Jax - love it!

AlexsAlias: So excited that finally the KC Chiefs will play a game with Larry Johnson NOT in the building. Not that lj even cares. Good Luck Charles!!