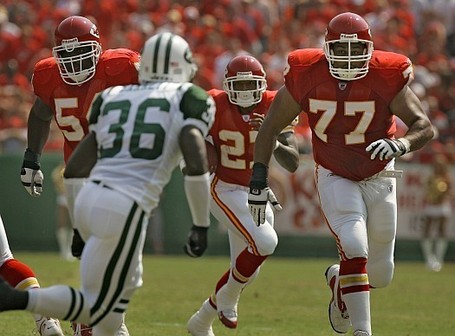 Running a bit behind today. Gotta skip the Twitter stuff. I'm sure you guys will get by somehow. Go Chiefs!

"The break was great," Cassel said on Thursday as the Chiefs continued their preparations for Sunday’s game in Jacksonville. "To get a few days away from here, to re-energize, come back focused, ready to go. We need to start getting on a roll here and hopefully we can start putting some wins together."

One of the ways the Chiefs can get the roll going that Cassel is talking about would be more production at the start of the game from the Chiefs offense. So far this season, they have been ineffective and unproductive on the first play, first possession and first quarter. There isn’t anything where the Chiefs rank first near the middle of the 2009 season.

It’s a pretty gruesome offensive picture early in these games:

Bowe said this week that his first months as coach Todd Haley’s whipping boy were humbling, demeaning, confusing and …

Bowe entered this season as an overconfident, unreliable and supremely talented receiver. Haley approached Bowe and, perhaps for the first time in his career, forced him to forget the show and just catch the ball. That wasn’t easy. Bowe likes to put on a show.

"One of the first things I said to Dwayne was: ‘Don’t give me your numbers,’ " Haley said. "If a receiver is on a losing team and has a thousand yards, it really doesn’t count in my mind."

Bowe continues to be a work in progress from KC Star

You might think the sign is intended for Larry "Tweet Tweet" Johnson’s edification. Not true. Larry isn’t around. He’s still suspended. You might think it’s simply a hostile reminder to players to keep their mouths shut about any glaring errors made by Egoli and Haley. There’s some truth in that.

But Pioli and Haley were thinking big picture when they hung the sign. It was for everyone’s edification.

Don’t buy Haley’s Thursday excuse that the hallway where the sign was posted is "sacred" and that the media shouldn’t have reported what the sign said. A Chiefs employee tweeted a picture of the sign. At one point Thursday, Haley said he didn’t even know what Twitter is.

These guys are in over their heads. Haley is taking the bullet for a sign that I’d almost guarantee came from Egoli’s head. No way the sign went up without Pioli’s approval. It took 24 hours for Pioli and Haley to figure out the sign makes them look Mickey Mouse and hypocritical.

Quarterback Matt Cassel said Thursday that it hasn’t been a distraction for him, and it has not upset his own pursuit of rhythm, as the Chiefs continue to audition new wide receivers — which they have done since the early days of training camp.

Now Minnesota defensive end Jared Allen has to show he can get sacks against somebody other than the Green Bay Packers.

Allen, the former Chiefs star, leads the NFL with 10 1/2 sacks, although 7 1/2 of them have come in two games against the Packers. At the halfway point of the season, it’s not unrealistic to start projecting Allen with not only his first 20-sack season, but he’s got a chance to break Michael Strahan’s NFL-record 22 1/2 sacks set in 2001.

"As an individual stat, that’s amazing," Allen said after the Vikings’ 38-26 win at Green Bay last Sunday. "Would I take a Super Bowl over that? Any day of the week. Twenty sacks would be great, but it’s way too early to be thinking about that.

"I hope to get one more against the team we play next after the bye week."

Allen enjoying a stellar season with Vikings from KC Star

Chiefs quarterback Matt Cassel has taken a beating at times this season, but he remains confident that he has an advantage when it comes to avoiding a concussion.

It was developed by Gerald Maher, the team dentist for the New England Patriots. Cassel spent the first four seasons in the NFL with New England before being traded to the Chiefs earlier this year. The Patriots are believed to have had the fewest concussions of any NFL team last season.

"Dr. Maher’s work with the Patriots is pretty well documented," Cassel said. "The guys in that locker room trust the protection that his mouthguards provide, and once I tried it, I won’t wear anything else. As quarterback, you want a mouthguard that not only gives a high level of protection, but is also comfortable and still allows you to speak audibly. Dr. Maher’s mouthguard gets an ‘A+’ in all of those respects."

The Chiefs Women’s Organization (CWO) has been busy this season visiting various agencies throughout the metro. Earlier this week, a group of over a dozen CWO members volunteered at Operation Breakthrough. While there, the CWO’s responsibilities included reading books, playing games, and making crafts with the children. A highlight of the CWO’s outreach schedule each year, this visit once again provided plenty of interaction between the center’s youth and the CWO.

For the most part, Jacksonville hasn’t stopped opposing quarterbacks. At this point, the Jaguars would be pleased with merely containing the field general.

I’m waiting for the evening when I’m watching Jeopardy and Alex Trebek says, "OK, NFL teams for $400 – This NFL squad nearly guarantees an opponent’s quarterback to go untouched, be as on target as a sharpshooter and throw at least one touchdown per game."

Trebek waits no more than two seconds as a contestant confidently states: "What is the Jacksonville Jaguars?"

The question is broad, but Jacksonville has a better likelihood of lifting a television blackout than containing a quarterback.

Trebek knows it, and you and I know it.

Stopping the Quarterback – It’s a Commitment from The Jacksonville Observer

In the wake of the Tennessee Titans' record-setting 305-yard rushing performance against the Jaguars last Sunday, much of the focus this week has been on improving the tackling and the run defense.

But another important factor in the game against the 1-6 Kansas City Chiefs this Sunday might be the Jaguars' ability to put heat on quarterback Matt Cassel.

The Jaguars' run defense figures to improve this week because Rashean Mathis is back practicing with a cast on his broken left index finger and has said it's not giving him any problems. His return enables Reggie Nelson to switch back to his safety spot after struggling at corner in Tennessee.

Jaguars aim to rev up pass rush from Jacksonville.com

The Chiefs are 21st in the league in rushing with 101.3 yards per game as Johnson has gained a career-low 2.7 per carry. Jamaal Charles, averaging 5.0 yards in limited action, could make his fourth career start.

"Our running game is something we know we have to have to have a chance to win," Haley said. "We're not going to beat people throwing it 50-60 times a game right now. Our running game is one of those areas that has to improve, specifically eliminating minus-yardage runs. So that's where our focus has been, and that's where it will continue to be."

Kansas City will face a Jacksonville team that ranks near the bottom in most major defensive categories. The Jaguars were burned for a franchise-worst 305 rushing yards in last week's 30-13 loss at Tennessee.

Jaguars vs. Chiefs from CBS Sports

It's not a total loss. But it's not far off.

Though the Jacksonville Jaguars at times have resembled the league's worst team through seven games of the 2009 NFL schedule, they nonetheless find themselves just two games shy of the existing wild-card lead in the AFC with half a season left to right the ship.

This week yields a golden opportunity.

Rather than the reigning Indianapolis juggernaut in their own division, or one of the conference's other powerhouses from Foxboro, Denver or Pittsburgh, the Jags are instead faced with a representative clearly bogged down on the other side of the spectrum - the one-win Kansas City Chiefs.

Then again, such a tonic proved useless last week.

Somewhere along the line, other more progressive NFL teams passed the Chiefs. Under Clark Hunt, the team seems to be wandering in the wilderness. Clark has a substantial soccer background, not football. Fans may feel that Pioli and Haley are in over their heads but the young owner may be as well.

I know this idea is sacrilegious in Kansas City, but the franchise is beginning to hurt in all areas. The team itself speaks the obvious.

To attend a Chiefs game and tailgate your heart away is no longer the thing to do. The December games at Arrowhead will be hard pressed to sell out. The consecutive non-blackout string in Kansas City will probably end this year.

For the first time in decades you see Chiefs ticket commercials on every media outlet. The atmosphere at the stadium no longer has that positive buzz of excitement.

Chiefs' Failures Start at the Top from The Examiner

Todd Haley coached in last year’s Super Bowl as offensive coordinator of the Arizona Cardinals. But several years ago, Haley couldn’t even land the job as head golf coach at Jacksonville University.
Now running the show with the Kansas City Chiefs, who face the Jaguars on Sunday, Haley discussed his experiences in golf, his father Dick (arguably one of the best personnel evaluators in NFL history) and the difficulty of leading a 1-6 team:

Would you say that this is sort of a homecoming for you?
No. I love Jacksonville. I love the Jacksonville area. I always have since I spent a lot of time there. I always look forward to getting back there. But you know my home is Pittsburgh.

Jaguars vs. Chiefs: Chiefs’ Haley once coached golf at UNF and JU from Jacksonville.com

The Jacksonville Jaguars took away David Garrard's radio show early in the season, then stripped him of the authority to audible Sunday.

What's next? His starting job? Not quite. The Jaguars (3-4) have made it clear they need Garrard to play better to have a chance to compete on a consistent basis.

Garrard has no touchdown passes, four interceptions and two fumbles in the last three games. He also has been sacked 10 times in that span behind a shaky line. The Jaguars, who have lost two of three, face Kansas City (1-6) on Sunday.

"They can't look over here and say, 'Well, this team is firing on all cylinders,"' Garrard said Wednesday. "We have to be able to execute. In the NFL, whoever you're playing, you've got to go out and execute and make the plays necessary."

With petitions to Scott Pioli apparently all the rage in Kansas City, perhaps a Chiefs fan should circulate one regarding that run defense. People saw what Jones-Drew was able to do against the Titans in Week 8, and the Chiefs actually give up 18.6 more rushing yards per game. Jones-Drew had a bit of a lull in production in Weeks 4 and 5 (14 yards and a touchdown against Tennessee, 34 yards and no touchdowns against Seattle), but the small back is more than back on track. The UCLA product has compiled a whopping 310 yards and five touchdowns combined over his last two games. Odds are that he will feast on this Chiefs defense, and if you can’t wait for his next big game, he has the Bills in Week 11. This is going to be a tremendous stretch for Jones-Drew owners.