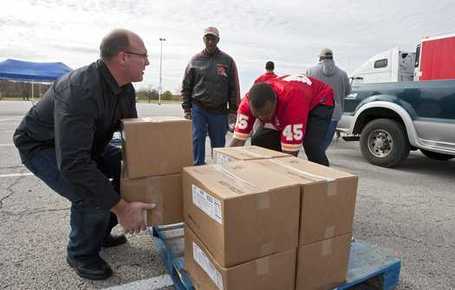 (Photo above: Chiefs general manager Scott Pioli and tight end Leonard Pope helped load some of the 30,000 pounds of protein products donated by Tyson Foods. The players, and other volunteers, transferred the food to vehicles from approximately 60 area relief organizations.)

The Chiefs continued what has been a futile search for help at wide receiver when they claimed Chris Chambers off the NFL waiver wire on Tuesday.

Released by the Chargers on Monday, Chambers is just another attempt by Pioli/Haley to add some firepower to their passing game. To this point, they’ve failed miserably.

Bobby Engram, Quinten Lawrence, Rodney Wright, C.J. Jones, Terrance Copper, Amani Toomer, Ashley Lelie, Bobby Wade and now Chambers. That group combined has provided the Chiefs offense with 27 catches for 298 yards and two touchdowns. Almost all of that belongs to Wade, with his 20 catches for 226 yards and both scores.

The changes won’t be as glaring as the overhaul the Chiefs underwent in 2008, when Gailey reshaped the offense mid-season to customize the scheme to quarterback Tyler Thigpen’s strengths. Brodie Croyle and Damon Huard suffered season-ending injuries in the same game, and Thigpen was forced into a starting role. It was important to keep him healthy, and to do that meant shifting to the spread. That allowed Thigpen to expand the pocket and improvise, if necessary, and it worked. The Chiefs aren’t planning to reintroduce the spread or any kind of gimmick offense — just a more finely tuned scheme that allows Cassel to release the ball faster and get plays in quicker.

Chiefs use bye week to fine-tune offense from KC Star

KMBC's Karen Kornacki reported that the district will gut Southeast high School stadium, which is about 50 years old, and build a new multi-sports complex.

It will cost $3.5 million but there is talk of increasing it to $10 million, Kornacki reported.

The stadium will be paid for with grants, sponsorships, private donations and fundraising.

Kansas City School District Athletic Director Kimble Anders said they have applied for an NFL grant and they have the support of the Chiefs team.

Do any of these incidents require a congressional hearing? Nope. Do they indicate that we've become so supersensitive about what famous people say and do that nobody with more than 10 entries on Google should ever open his mouth or leave her house without first clearing it with a publicist? Probably.

But the controversies are also a sign of society's robust health. We debate these words and behaviors -- are they heinous and unforgivable or just dumb and obtuse? -- because we don't really know just how to feel about them. And sports is both mirror and lamp. The mirror shows us where we are; the lamp leads us up and out.

Chicago Blackhawks' blackface forces the issue from The Chicago Tribune

It’s gotten to the point where my favorite week of the football season is the Chiefs’ bye week. Why? Because I get a break from the constant reminder that my favorite team just isn’t that good.

There is no doubt that, particularly after 2003, there was a good amount of evidence pointing towards Chris Chambers’ becoming a star WR; since then, though, he has basically fallen off of a cliff...

...Simply put, regardless of how ugly a quarterback or how decrepit a team a WR is surrounded by, elite WRs simply catch a higher percentage of the balls thrown to them than Chris Chambers does.

Chris Chambers, the Worst WR in Football from Patriots Daily

Scouts from the Kansas City Chiefs were present at today’s Notre Dame practice in South Bend.  Joining them were representatives from the New England Patriots and Indianapolis Colts.

There are a handful of very interesting NFL prospects playing for the Irish and the Chiefs currently hold 8 draft picks (and counting!) so it’s never too early to keep tabs on the players of note at each school Kansas City is scouting.

studie32 Had a great time with @douggieboomer today. . . . Back to the grind tomorrow.

ArrowheadPride RT @robmikesh Year to date, I have as many #NFL rushing touchdowns as the entire Kansas City Chiefs running back corps.

ArrowheadPride As I sift through today's news, I realize LJ is soo last week.

Tomahawkkid88: Just launched a brand new awesome ALL POSITIVE chiefs forum. Chech it out and sign up as a member at www.barryskoolaid.com GO KC!

BillKempin: Sportscasters bashing the Chiefs for signing guys released by other teams seem to be unaware it' illegal to sign dudes playing elsewhere.

QueenJerrica: Dude on Jimmy Fallon says he is a chiefs fan lol