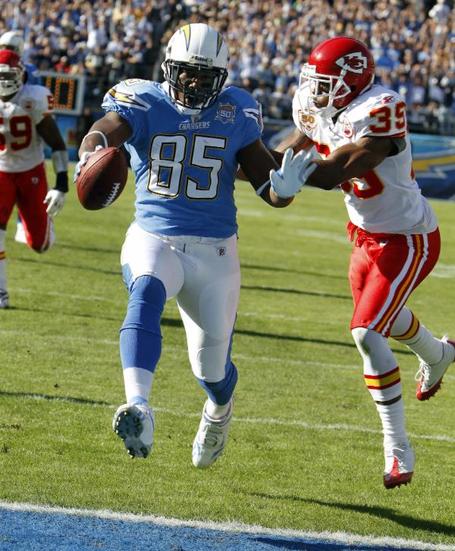 From the FanPosts. Bumped up the time. -Joel

I started to make a post about the glaring weaknesses about the defense, and do my usual grading, but felt it would be overwhelmed with negativity (my own and in the comments), so I thought I'd try a little something new.

The defense this week gave up four touchdowns to the Chargers. Two were short runs from LT, one set up by a long, fairly well covered jump ball, and the other by a botched snap. While tough to swallow, those plays weren't entirely on the called coverage scheme. However, the glaring weakness we've seen all year is the inability for our defense to cover a tight end in the middle of the field. With Gates' two post routes for TD's, I thought I'd give a look at the scheme, how it broke down as the play went along, and where the coverage/call went wrong. 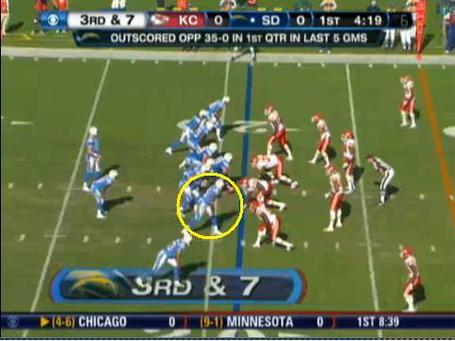 As you'll see, the defense is lined up in a 2 down lineman, 4 linebacker setup (that's Daniels up near the 'backers). Gates is highlighted in yellow, and the Chargers are in a 4 WR set. The two outside WR's are covered by Flowers and Carr, and Daniels has the second WR on the top. The two OLB's are going to rush the passer leaving Belcher and DJ with the responsibilities of covering the TE and the RB, respectively. San Diego wants to throw at Belcher, so Sproles is lined up on DJ's side, leaving Belcher with Gates. Brown and McGraw (off screen) are playing a deep zone. 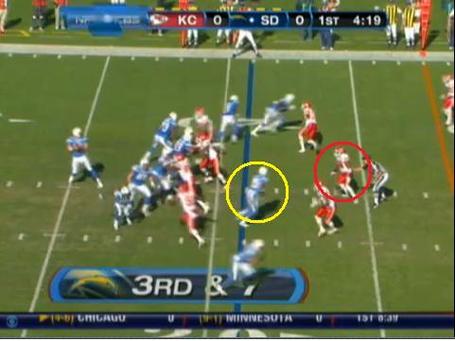 Alright, snapping forward, the outside receivers have started their deep routes, the slot receiver has cut to the outside, and Sproles has started his move into the flat. DJ passes responsibility of Gates to Belcher and moves to cover Sproles. They've got the matchup they want now. 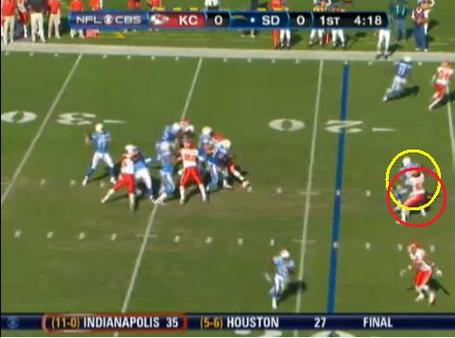 Going forward once again, the routes have run everyone out of the short middle of the field, leaving Belcher and Gates 1-on-1. This is an all day easy matchup for Gates, as he's bigger and more athletic than Jovan in the passing game. He's officially shielded Belcher from where Rivers will put the ball and has turned up towards the endzone. Take note: Tamba's being blatantly held right in front of Rivers. 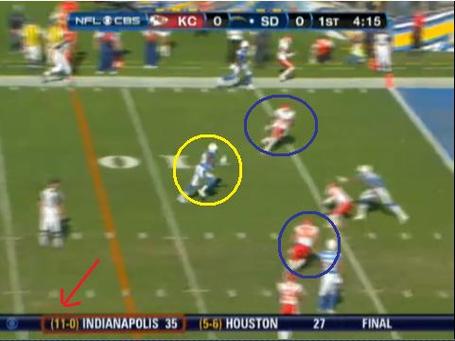 And the TD. Belcher is officially left in the dust, failing to make the tackle on the faster Gates. The DB's (not circling McGraw due to yet another blatant penalty, this time a block in the back) are VERY out of position. Carr (top circle) was responsible for Floyd at the start of the play, who is laying the block on McGraw, and was doubling Naane on the top route. Brown (lower circle) is doubling Vincent Jackson. This left McGraw (on deep, goal-line duties) to be the last resort for a pass in the middle of the field, instead of putting another DB on the Gates route. Belcher jumped the pass, missed, and Gates has 10+ yards of clear space with no Chief nearby. Thus, touchdown. Poor coverage call with 5 eligible receivers when we had been playing a 1-on-1 coverage on Floyd/Jackson most plays before this. 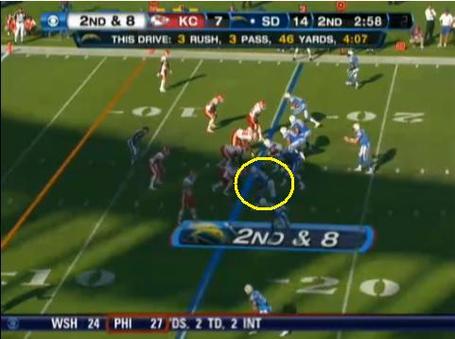 Alright, on this play, the Chargers line up with 5 WR. We're in our base 3-4, and before the play, Tamba and Studebaker have switched sides so Tamba doesn't have to drop into coverage. Floyd and Jackson are on the lower side of your screen, with Naane and LT to the top. Gates, as usual, is circled. Studebaker is matched up on Floyd, Williams is on Naane, Flowers is on LT, and Carr (off screen, what a cushion!) is on Jackson. That leaves Corey Mays on Gates, yet another matchup that they like. Once again, Brown and McGraw are playing a goalline zone. 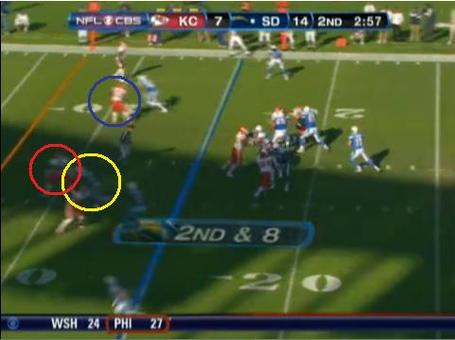 The play starts, and the linebackers shift. Williams sticks with Naane and gets run outside of the short zone. Mays starts to cover Gates through the middle zone, while Studebaker sticks with Floyd on the slant. As Floyd continues his slant, Studebaker drops further into coverage and passes him to Mays. Mays steps up to cover Floyd and passes Gates to McGraw at the same time that Williams passes Naane to Brown. The problem? McGraw's shading towards Jackson on a double team. 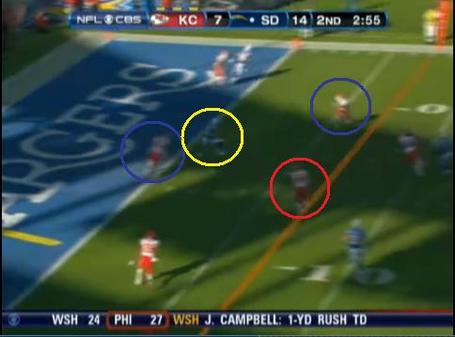 McGraw can't get over in time to make up for Mays' "let go" of Gates (see how far he moved forward on Naane?), and Studebaker can't get back quickly enough for the switch. I've highlighted Studebaker and Williams to show how Pendergast tried to solve this TE Post problem. By running the LB's nearly straight backwards, he's trying to cover up the gap in the center of the field. The problem is still there and unfixed, though. McGraw is buried in the endzone, and Brown is up on the endzone fade route. Flowers is stuck on LT, still standing near the line of scrimmage, leaving Brown with that responsibility, instead of shifting Williams to the outside. In this situation, the best pass defenders on the team are "frozen out" of the play, and a short cut across the middle leaves a monster-truck sized hole in the secondary for the second time in the game.

I'm harping on the matchups and the switching so much in this post because we've been burned so many times by it. We don't have a stud pass-defending LB on this team, and when Vrabel's out, we don't really have a mediocre one. Pendergast HAS to recognize this by now. Yet, too often, he doubles the outside receiver or lets the safety get run out by a passed receiver, leaving a hole in the defense. He's got to either get those safeties to stay home or get his linebackers to drop further.

Take note, these aren't blitzing plays. We're dropping 7 into coverage on 5 eligible receivers, and that leaves little excuse for the size of the gaps we're seeing in the middle of the field. Flowers and Carr played well on Floyd and Jackson yesterday when they were heads-up with them.

If you're shutting down receivers as the game goes along, and you're consistently getting burnt by the TE, the logical solution is to stick Brown or McGraw on a double team with a LB and limit the catches/yardage. It didn't happen yesterday, and has happened rarely this year. Does the problem lie in Pendergast's ability to call coverage schemes? Is it lack of talent on our LB/DB corps? Or is it both? Whatever the solution, something needs to happen to make it stop.

We've given up too many easy first downs and touchdowns to the same play that could've been prevented by a coverage call/audible that didn't happen. Someone needs to get something to fix it in the playbook in a hurry.