Possible Vanderbilt Players The Chiefs Might Be Watching This Weekend 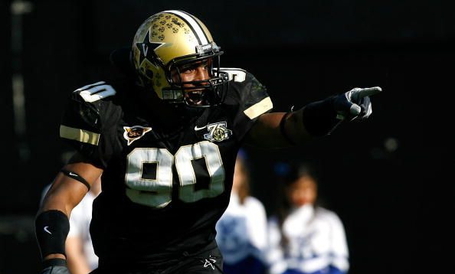 Earlier, Joel made note the Chiefs were headed to Gator Country for a look at the Florida vs. Vanderbilt SEC match-up. And while the Scouts could keep busy most of the afternoon with the Gators squad of players, that doesn't mean Vandy is void of talent. In fact, here are some worthwhile prospects to keep in mind if you wanted to watch the game alongside our Chiefs scouts:

Broderick Stewart - Defensive End
The 6'4" pass rushing specialist has "impressive speed off the edge" according to Scout.com and has proven his ability to sack the quarterback with 18 total sacks in his career, which puts him only 3 off of the record of 21 set by Alan Young set back in '93. He's a rare bright spot on a poor team who plays intelligent football and could be interesting at the next level.

Myron Lewis - Cornerback
Lewis has great size (6'2", 205 lbs) and speed and a knack for the football both in the backfield and in the air (had five sacks AND five interceptions in 2008). He also had two forced fumbles. This year, he's among the SEC interception leaders again with three thus far and continues to be among team leaders in tackles. Still Lewis has some injury concerns (shoulder surgery last spring) and the National Football Post's Wes Bunting writes: "Displays impressive dimensions and physicality, but lacks the quickness to consistently close on the ball. Struggles transitioning out of his breaks, and I don’t think he has the ability to play man coverage at the next level."

Alex Washington - Wide Receiver
Here's the sleeper although I highly doubt Washington's getting drafted at all. His value to a team would entirely be on special teams as a return specialist and even then his highlight reel isn't that great. But his high-end speed is top-notch and he's coming off major knee surgery from 2007 and still hasn't fully recovered. Unlucky for him, Vanderbilt is playing all their kiddos and rightfully so this season. Still, as a former sprint/track champion in high school, Washington holds promise as a kick/punt returner to bring to camp.