Share All sharing options for: Chiefs Decision on Kolby Smith Coming by Friday 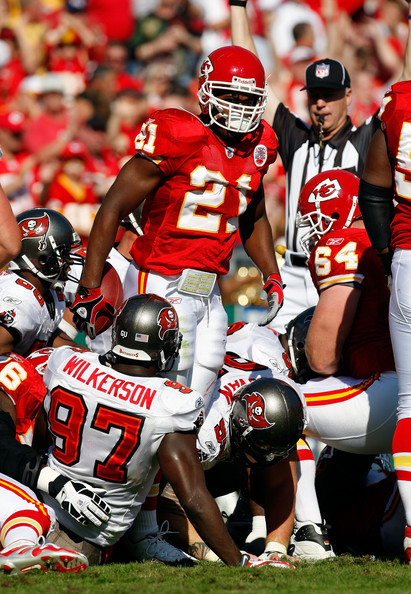 (Update Nov. 4th: Haley said he was wrong. The team has until Saturday.) In a press conference with reporters yesterday, Kansas City Chiefs head coach Todd Haley said the team will make a decision by Friday regarding the status of RB Kolby Smith.

Injured exactly a year ago yesterday, Smith landed on the PUP list prior to the season and started practicing two weeks ago. The Chiefs have another week to determine if they will activate him or not but all signs are pointing to an active Smith.

"He made it through the first two weeks pretty well," the head coach said of Smith, "and looked like he was moving around pretty good today so I’m optimistic about having an opportunity to see him play."

The Chiefs coaching staff has been used to seeing him in the rehab area throughout the offseason and first seven weeks of the regular season.  Smith has been working out every day and multiple reports indicate he's getting his "body by Haley", whatever that means.

The Chiefs are just now getting to see how he plays in pads.

"So far, not a great look," Haley said when asked how much he can glean from Smith in practice without pads, "but we’ll go into pads here once we get back. All last week we were in shells. But we’ll make sure it’ll be up-tempo for him and if, indeed, we are going to activate him we would want him to be ready."

In the event that Smith can go, he expects to split time with No. 1 back Jamaal Charles, who is facing his own questions of whether he can hold the entire load.

"Obviously, there is going to be some more play-time involved here and I think he’s got a great opportunity," Haley said of Charles.

Haley did not give Charles a glowing review when asked if he was capable of carrying a full load responding, "I don't know."

"We’ll have to see how that goes," he continued. "But I think he’s doing everything on his end to be ready to go. He’s probably our best pass protector as a back as far as understanding who’s he supposed to block. He’s really improved at that and he’s listened to Coach Mo [Carthon] who’s stayed on him pretty hard from the start. I think he’s getting better. We’ll see how it goes but it’s an opportunity for Jamaal."

Of course, a discussion didn't go by without Haley pointing to minus-plays as a huge problem for the team.

"I think our offense in general needs to be better and that has to start with the elimination of negative plays," he said. "We just can’t have the amount of hidden yardage in negative plays that we have. Figuring 100 yards equals seven points and you start adding those up you’re getting into significant points that we’ve left out there."