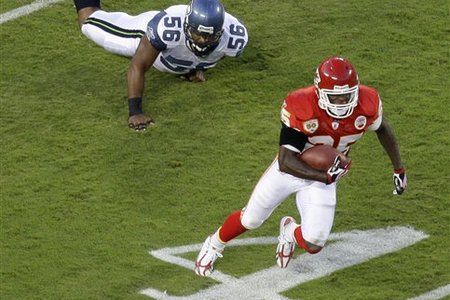 Evidently there is some new formating on SB Nation today. Hope this is readable.

"I’m ready to go, whatever they give me," Charles said. "I’ll go out there and try to make plays for the team.

"I’m a running back. I know how to run the ball. Whatever running plays they give me, I’ll be able to do them."

Haley’s actions would indicate he’s not as certain about Charles as a runner. Haley hasn’t been afraid to try different players when a certain part of the Chiefs isn’t working properly.

The running game certainly qualifies. Johnson is averaging only 2.7 yards per carry and doesn’t have a touchdown, yet the running game has stayed mostly as his domain.

This is the first time in Hoffman’s 21-year NFL coaching career where he’s handled the entire special teams package. Up to this season, during 17 years in Dallas, one in Atlanta and two with Miami, Hoffman’s duties involved only the punter and kicker. He did not handle the other 10 players on each kick.

But Haley has given him the chance to do it all. How much fun has it been?

"I don’t know if I’d say fun," Hoffman said with a weary smile. "It’s been a lot of work. I just feel a tremendous responsibility o do well. It’s just mind boggling how many things you have to think of to cover all the bases, from a roster standpoint, making sure you know who is going to make the team and who is going to be active on Sundays.

McGraw’s injury, which the Chiefs haven’t specified, doesn’t appear as serious as Page’s. But he could also miss the Jaguars game. McGraw didn’t practice Monday, but he was riding a stationary bicycle in a corner of the practice field in the area reserved for injured players.

The injuries leave the Chiefs in a bind. Their only other safeties are Mike Brown and DaJuan Morgan. The Chiefs will likely have at least one more safety on their roster by Wednesday, when they resume practice after today’s day off.

The Chiefs have an open roster spot because of the suspension of running back Larry Johnson.

But a team that ranks 31st in offense and 27th in defense has to throw a changeup at some point, right? Surely Scott Pioli and Todd Haley, desperately needing to convince legions of potential season ticket-holders that they know what they’re doing, won’t stand pat as we begin the season’s second half.

Nah, they couldn’t possibly do that. Here’s five changes we hope to see in the coming weeks – hopefully starting as soon as this Sunday in Jacksonville.

Will the Chiefs Change? from WPI

Now the Rams must escape the league cellar by riding Jackson to additional victories during the second half.

Here are some teams the Rams could pass during their final eight weeks...

...Kansas City Chiefs: Their sole victory came against the hapless Redskins. The Chiefs (1-6) used their bye week to address the Larry Johnson situation, suspending him for a game for misconduct.

The Chiefs put up with Johnson’s antics when he was a dominant running back, but this season he is averaging just 2.7 yards per carry. He is the anti-Steven Jackson right now, setting the worst possible example for his teammates.

NFL's worst? It's not the Rams from St Louis Today

almighty31 gotta get to work. wat shall i do now tho?

KSUpurple: Is there a worse sports town than Kansas City, the Royals are the permanent rebuilding team and the Chiefs...3 wins in a season and a half!

BrejanaeFTL186: Seriously Chiefs, when will we see some football like this Saints-Falcons game? I want interceptions, sacks, touchdowns. The whole nine yds.

bemonteer: I repeat, if Larry Johnson carries the ball again, EVER for the Chiefs, im done. I love this team, gave them my heart and soul.

vigliaturo: Man. I miss watching TGonz play every Sunday for the chiefs.