Chiefs RB Charles Wants to Compare Himself to LT, Sproles

Share All sharing options for: Chiefs RB Charles Wants to Compare Himself to LT, Sproles 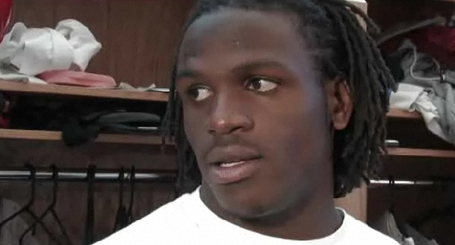 Kansas City Chiefs RB Jamaal Charles talked with the media this week. The Chiefs are 2-0 since Charles officially became the team's No. 1 running back.  In two games, he has gone over 100 yards once and returned a kickoff for a touchdown.

Charles says he's definitely taking notice of backs like the two the Chiefs are preparing to play this weekend.

"Looking at [Darren] Sproles and LaDainian [Tomlinson], they're two great running backs for the Chargers," Charles says via a Kansas City Star video. "I try to compare my game to them also and look at them run sometimes.  I know when LaDainian was young he used to move around quicker and faster.  That's what I wanted to be like was LaDainian catching the ball outta the backfield and helping this team win.

"And Sproles, he's an explosive back, too, and he does the same thing helping out the Chargers."

Charles says he will use that as motivation to put in a good performance on Sunday.

Charles also responded to questions asking how he feels when people say he's not an every down back.

"It's not about how big you are, It's not how fast you are, it's not how quick you move and who you can run over.  It's all about will and heart.  And if you have heart you can do anything you put your mind to.

Charles is about 200 pounds.