Share All sharing options for: Chiefs Work Out a Former Bengals RB 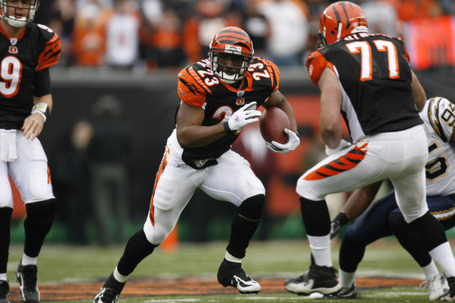 Perry was a 2004 Cincinnati Bengals first round draft pick and spent four years with the club.

Last season, the Bengals cut starter Rudi Johnson paving the way for Perry to be the full time starter.  However, things didn't go his way and he only averaged 2.7 (!) yards per carry before being benched for Cedric Benson.

Perry was also drafted by the UFL's Florida Tuskers this summer.

He's 6'0", 220 pounds or so and could fill an LJ-like role if the Chiefs chose to sign him.  The Chiefs are a little light at RB with Dantrell Savage being down.  Tim Castille has appeared to be a quick fix at running back seeing surprisingly a good number of carries last weekend despite signing last Wednesday.

Ryan over at KC Chiefs Blog seems to think he's worth taking a closer look at.

You can’t expect much from a guy that hasn’t gotten a sniff in the league since April, but he is still only 27 and wouldn’t cost the team anything to take a look.  He was dynamic at Michigan and showed flashes (albeit small ones) during his time with the Bengals and might not be a bad idea to take a chance on him.

So, the Bengals sign a former Chiefs RB and now the Chiefs work out a former Bengals RB.

(H/T CHIEFER for the first FanShot)