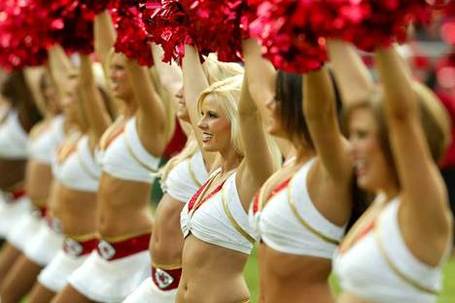 Good morning! Just a note that I am away over the Thanksgiving weekend, so I'm unable to do another Arrowheadlines until Monday morning. I will likely be able to peek in from time to time before then, but there's no way I'll be able to do the morning post. I'm pretty sure Chris and Joel will pick up my slack. That being said, very best holiday wishes to you and yours. To those traveling, be safe.

I also wanted to include a look back to 2006 and the Thanksgiving game against Denver. That's after the jump.

Just under four weeks after he walked into Turner’s office, Chambers has become a growing part of the Chiefs offense. He’s already caught 10 passes for 249 yards in three games. He’s got a pair of touchdown catches and his 61-yard play against the Steelers set up the game winning FG in overtime.

And, Sunday he’s going back to San Diego to face his old team as the Chiefs seek their third-straight victory.

"I’m definitely playing with a little bit of a chip on my shoulder because of the way things ended in San Diego," said Chambers. "I’m just looking to prove to myself and my teammates that I can help them win games."

Todd Haley was talking again Tuesday about the detailed process — and the many unseen steps it takes — of rebuilding the Chiefs into a relevant part of the NFL conversation.

Haley has described how talent can be overshadowed by hard work, and how a player’s name and presumed job security don’t mean much when he plays for a team that has won five of its last 35 games.

He has said that the Chiefs need players who want to pursue greatness instead of wait for it, and finding those who might develop into something that once seemed unlikely.

Underdogs get a reward from KC Star

Clary, the Chargers' starting right tackle, suffered ligament damage in his left ankle during San Diego's win over Denver on Sunday and was placed on injured reserve last night, ending his season.

The Chargers signed Runyan, the right tackle who started every game in this decade for the Eagles before this season.

The Dallas Texans won the fourth quarter of their contest with the New York Titans, 22-13.

Only problem was the Titans won the first three quarters and thus won the game 41-35. It was the highest scoring game in the first season of the American Football League and was one of those games that earned the league the reputation of being wide-open and built on passing. A small crowd of 14,344 sat in the Polo Grounds (right) and watched the game on Thanksgiving. The game was also broadcast on national television, which helped create the aura of the wild, high scoring AFL.

The teams combined for 76 points, nine touchdowns, 814 yards in total offense, 527 net passing yards, as the quarterbacks were a combined 35 of 70.

Texans Fall On Thanksgiving To Titans from Bob Gretz

Roethlisberger took a knee to the head in last week's overtime loss to the Kansas City Chiefs. Tomlin, speaking at his weekly news conference, confirmed that Roethlisberger suffered a concussion but the quarterback passed all of the neurological tests Monday.

"A team coming off two big wins like Kansas City is, I think helps our guys," Norv Turner said. "The most important thing for them is to put the film on and when we watch our first game, there are some physical matchups and there are some plays that we made because we were in the right place at the right time."

Now, the pressure is squarely on the Broncos, especially if the Chargers beat the Chiefs on Sunday. If that happens -- and if Denver loses any of its three remaining divisional games -- San Diego will all but lock up the division crown and the home playoff game that comes with it.

But if the Chargers lose to Kansas City, it opens the door for the Broncos to not only get back into the division race, but to reclaim the tiebreaker as well.

"It feels great [to lead the division]," Malcom Floyd said, "but Kansas City just beat Pittsburgh, so we have to get ready for them."

The veteran wideout was a Charger just four weeks ago. The Chargers released Chambers after a lackluster start, citing a desire to use his backup, WR Malcom Floyd, more often. The change in scenery apparently did Chambers some good. He already has more catches as a Chief than he did in seven games with the Chargers. He's the Chiefs' No. 1 receiver now that DeWayne Bowe has been suspended for violating the NFL's policy on banned substances. He has 10 receptions for 249 yards and two touchdowns, a strong total that includes a clutch 61-yard reception that set up last week's victory over Pittsburgh. Chambers has flourished in Kansas City, proving that his standout career is not yet over.

Chris Chambers, WR. Pretty obvious, right? After catching just nine passes in seven games for the Chargers, Chambers was claimed off waivers by the Chiefs, and suddenly he's turned into Jerry Rice. Or at least vintage Chris Chambers. In three games, he has 10 catches for a whopping 249 yards and two TDs, and don't you think he might want to prove something Sunday?

Jamaal Charles, RB/KR. This week's version of Eddie Royal, capable of hurting the Chargers in multiple ways. A week ago Charles rushed for 103 yards against the Raiders, and last week he returned the opening kickoff 97 yards for a TD. He's averaging a healthy 4.9 yards per carry and 25.7 yards per kickoff return. He also has 23 receptions.

Andy Studebaker, OLB. Making his first career start last week, the second-year player from Wheaton College produced the first two interceptions of his career, including one he returned 94 yards. The takeaways set up 10 Chiefs points.

Scouting the Chiefs from The San Diego Union-Tribune

Ryan Succop gained the dubious honor of being "Mr. Irrelevant" when he was the 256th and final player selected in April's NFL draft.

He could not have been more relevant on Sunday, when his 22-yard field goal in overtime lifted the Kansas City Chiefs to a shocking 27-24 victory against the Pittsburgh Steelers at Arrowhead Stadium.

Rookie Focus: Chiefs' Succop Proving to be Anyhting but Irrelevant from USA Today

Following Sunday’s emotionally charged 27-24 overtime victory over the Pittsburgh Steelers at Arrowhead Stadium, we met the young man the Kansas City Chiefs hired as their head coach back in February.

If that statement confuses you, please let me explain.

We’ve all seen the dazed and confused head coach who seems to have occasional problems with clock management.

We’ve witnessed the guy who gets in his players’ faces on the sidelines and makes such a spectacle of himself that it overshadows anything his team might accomplish.

We’ve listened to the guy who drags himself into postgame interviews and displays about as much joy and love of the game as a seventh grade soccer coach whose team is made up of ADD students on a sugar high.

The guy never seemed to have any fun, and his lack of enthusiasm was contagious – on the field and in the stands.

But Sunday, we met the new and improved Todd Haley.

Haley Shows His Mettle from The Examiner

Sour Play of the Week: With Pittsburgh leading 24-17 with seven minutes remaining in regulation at Kansas City, Matt Cassel pump-faked right, then threw deep left 47 yards to Chris Chambers, setting up the touchdown that forced overtime. On the play, cornerback Ike Taylor let Chambers go when Cassel pump-faked, and no Pittsburgh safety picked him up -- three Steelers were standing like topiary in the middle of the field, covering no one, as the opposition's deep threat streaked deep. But the Pittsburgh defense could get even more sour than that. See below.

Passing = winning in the NFL from ESPN

The Chiefs are 13.5 point underdogs this weekend against the Chargers.

How to bet the point spread on NFL...BetUs.com

Adam_Schefter Thanksgiving is one of the best days of the year, but it always has condensed what already is a busy work week into an even busier one.

Adam_Schefter ESPN analyst Trent Dilfer on Jay Cutler in today's NY Times: "He was never as good as everybody said he was....He's a very average player."

colettemarie89: is having a great break!....saw New Moon, watched the Chiefs win, road tripped to Ok w/Michael, saw Blind Side & had lots of ice cream! :)

dalephelps: Maybe it will only last a week, but it's nice to have the #Chiefs seem somewhat relevant again.