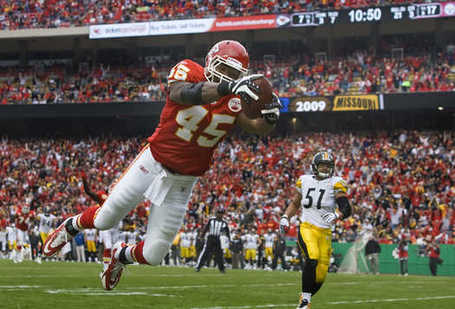 Your Tuesday morning Kansas City Chiefs news from across the internet. Enjoy.

Todd Haley was a genius on Sunday, just a week after he was considered a dolt even in a winning effort against Oakland. Getting the unexpected victory over the Steelers was built on many decisions and a lot of them went the Chiefs way.

Here are four decisions that came down on Sunday that helped the Chiefs to victory.

The 3-7 Chiefs get another test this Sunday when they play the 7-3 Chargers in San Diego. The Chargers, who beat the Chiefs 37-7 at Arrowhead Stadium last month, have won five straight games and moved into first place in the AFC West with Sunday’s 32-3 win over Denver.

Regardless of how the Chiefs fare in San Diego, they could look back on the overtime victory against the Steelers as a defining moment in their effort to build one of the league’s premier programs.

"I hope it’s that," McGraw said. "It definitely has the potential to be that. Hopefully, we’ll use it as something we can really build on, a cornerstone of what we’re trying to do here.

The media horde gathered for Todd Haley’s weekly press conference, the first one to come after two consecutive Chiefs victories.

Haley was not celebrating or ebullient as he stood behind the podium. It was 24 hours after the Chiefs overtime victory and the head coach had moved on. There were the San Diego Chargers to get ready for this weekend.

But he did have a few things to say about the game and how things played out in the victory over Pittsburgh. Here are the highlights.

While the Pittsburgh Steelers were hampered as the heart of their defense, safety Troy Polomalu sat out due to injury, it was still clear that no one believed the Chiefs had a chance to win against the reigning Super Bowl Champions.

With a large number of Steeler fans in attendance at Arrowhead Stadium, it was those who dawn the red and gold and attend week-after-week who cheered on a Ryan Succop game-winning field goal in overtime.

Here’s how the grades shake out:

To paraphrase Winston Churchill, Kansas City's victory over the Pittsburgh Steelers was not the end of the Chiefs' long battle to regain respectability.

It was not even the beginning of the end.

But maybe it was the end of the beginning.

It may sound strange, given the Chargers have won five straight to climb atop the AFC West, but it appears we may have a perfect storm here, a confluence of circumstances that will keep Sunday's game in Qualcomm Stadium invisible to local TV.

And so the first blackout since San Diego hosted the Saints on Nov. 7, 2004 — 44 home games ago — not only looms, but appears almost certain. As of yesterday, nearly 6,000 of the 56,500 tickets that count toward lifting a blackout had not been sold.

"As of noon," Chargers Chief Operating Officer Jim Steeg was saying, "we had sold 180 tickets. My thinking is that, instead of moving 180 by noon, we need to move 180 an hour.

Blackout policy a turkey for S.D. from The San Diego Union-Tribune

That's before Sunday's game at Qualcomm Stadium against the Chiefs, who suddenly seem a little different than the team the Chargers routed 37-7 last month.

The Chiefs have won two straight after beating the Pittsburgh Steelers 27-24 in overtime Sunday.

If anything, the Chargers saw the Chiefs' victory as a potent reminder that work remains.

"That was good for us," left tackle Marcus McNeill said. "It was an eye- opener. Pittsburgh is a great team."

That would be the Pittsburgh that beat the Chargers 38-28 last month.

"Obviously it says a lot about Kansas City's continued progress," Rivers said. "They beat a Pittsburgh team, and we know what Pittsburgh did to us."

Keeping that drive alive from The San Diego Union-Tribune

Winning on the road is tough in the NFL, but yesterday in Oakland and Kansas City, the Bengals and the Steelers showed us a blueprint of how to play football unprepared, unaccountable and at a level that is unacceptable for a playoff-contending football team.

One thing we have to understand about this league is that no matter what records are attached to a team’s name—such as the Raiders and the Chiefs—these guys still are professional football players. They are still being paid to play, and if you give them an open door or show them an opportunity, they will take advantage of it.

Losses by Bengals, Steelers not surprising from The National Football Post

We know, we know. "That’s why they play the games" and "any given Sunday" and all that. But mere football clichés, true though they may be, don’t quite capture the weird majesty of Week 11 in the NFL.

The ultra-moribund Cleveland Browns and Detroit Lions — a match-up your Fixer described as "belief-system-challenging" on Friday — faced off in a wildly enjoyable 38-37 shootout that wound up being a record-breaking game for Lions quarterback Matthew Stafford. The rookie threw the pass of the day, a game-winner with no time on the clock.

Ultra-mangy underdogs had their days elsewhere, too, as the Oakland Raiders pulled out a late 20-17 win over the AFC Central North-leading Cincinnati Bengals and the Kansas City Chiefs outlasted the Pittsburgh Steelers in overtime, 27-24.

If there is a football self-help book called "When Bad Things Happen to Good Football Teams," it’s surely flying off the shelves today.

Underdogs Rule for One Sunday from The Wall Street Journal

That siren is still echoing around running back Larry Johnson. You think it’s a coincidence the once-soaring Bengals signed him last week and immediately coughed up a game in the final 33 seconds to the horrendous Raiders? On the same day, the team freed from Johnson’s grip, Kansas City, sprang a thrilling upset over the Steelers.

A Pox on the Bengals from The New York Times

Last year, South Carolina's outstanding kickerRyan Succop was given the honor of being selected dead last in the draft by the Kansas City Chiefs.  He was one of just two kickers selected.  Succop has a huge leg and is more than capable of handling kickoffs, field goals, and extra points.  He arrived in Kansas City, beat out incumbent Connor Barth for the starting job, and has quietly had a great rookie season for a terrible team.  He put a cherry on top today by kicking the overtime field goal that gave the Chiefs their huge overtime victory against the defending Superbowl Champion Pittsburgh Steelers.

So, good for you Ryan Succop.  You're no longer even a little bit irrelevant.  In fact, there's going to be just one NFL rookie getting more TV time than you today: Matthew Stafford, who was picked 255 spots in front of you.  Good work, fellow Gamecock.

Irrelevant no more- Succop shines in NFL from Examiner.com

STORY OF THE WEEK

On a Sunday when New Orleans and Indianapolis each went to 10-0, there also was reason for a few of the NFL's dregs to rejoice.

Kansas City returned the opening kickoff for a touchdown, fell behind by 10 points and then rallied to stun defending Super Bowl champion Pittsburgh 27-24 in overtime. In improving to 3-7, the Chiefs won consecutive games for the first time since 2007.

NFL Rewind from The Washington Times

The prognosis on Jeromey Clary's injured left ankle is not good.

The Chargers right tackle sprained a ligament in the fourth quarter of Sunday's 32-3 victory at Denver, a costly setback that could have a lasting impact. It might even end Clary's season.

"I think that would be premature," Chargers coach Norv Turner said. "But that is a concern of mine, yes."

CHARGERS: Clary could be out for season with sprained ankle ligament from North County Times

BFlowers24 shoutout to the whole kc squad and the fans.....great win....pick up the usa today we havn fun n kc on the cover....

kb_kcstar But both sides screwed it up. Pollard was a loud-mouthed rebel who probably needed this fire lit under him. KC misjudged his talent.

kb_kcstar Sometimes players just don't fit in a team's culture, for better or worse. Honestly, I don't think either side regrets how it happened.

seanelgar: @Ms_Liv if anyone had picked raiders and chiefs then I would have crapped my pants!

The_Katbot: @jason_wilson Yes, my fantasy victory this week was basically the equivalent of the Chiefs beating the Steelers. Only I won by 35 points

BarrysKOOLAID: Actually, I am the ONE person in the world who said the Chiefs would bea... (YouTube http://bit.ly/07a8MeY )

g1goodw: We went to the Chiefs/Steelers game on Sunday and my team shocked the world in OT!