Share All sharing options for: Chiefs Players Say It's 'A Lot Easier' To Come Back After a Win 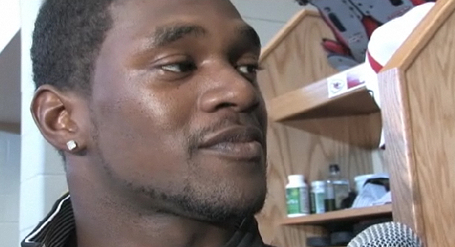 The Kansas City Chiefs were back to work at the Chiefs facilities this morning in a good mood.  The players are no different than us - it's always easier to go into work on Monday morning after a Chiefs win.

"A lot easier, a whole lot easier," LB Jovan Belcher said when asked if it was easier to come into the facility this week.

"It was a big one, being Super Bowl champs last year, so it was a big win."

Indeed it was big but after a day off tomorrow the Chiefs are back to it preparing for another team on Wednesday.

With their next opponent looming, a few Chiefs players spent time Monday morning talking about the big win over Pittsburgh yesterday.

"The biggest thing is that we, the Kansas City Chiefs, beat the Pittsburgh Steelers yesterday.  it was nice to have a part in that but it was a huge team victory and to be a part of it was awesome."

"We're 2-0 i the third quarter of the season and that's the direction we want to go and continue."

"All the coaches and players have been working really hard since I"ve been here and it's like we're being rewarded for a lot of hard work.  It's definitely a step in the right direction."

"The guys were starting to surround each other and play for each other.  It was just great to get a total team victory - offense, defense and special teams played great.  We know we're capable of beating a team of that caliber and we can move on and play even better next Sunday."