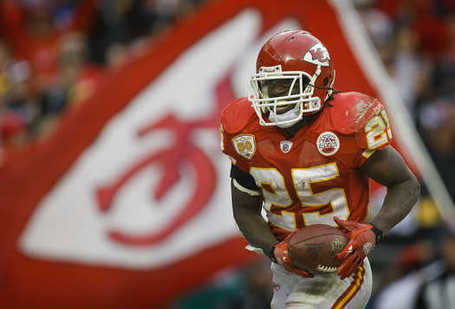 First thing. Holy crap! Between my ear I know we won, but I'm still not totally feeling it. Haley called a solid game for the most part, and the team played like they knew they could win. It was a great job. Also, despite all I have read about the Steeler-heavy crowd, it didn't look anywhere near as bad on TV as I thought it might, so a special thanks to those who went out and supported the team.

"Obviously it’s a big win for this team," head coach Todd Haley said. "We’re a young team and I really feel like we’ve been making progress. I felt like going into this game this would be a great opportunity to measure where we are as a team."

This wasn’t a victory over the horrid Raiders or the bumbling Redskins. These were the defending Super Bowl champion Steelers, the 6-3 on the season Steelers. That Pittsburgh is now 6-4 on the season and the Chiefs are 3-7 was testimony that yes, the red and gold are improving.

"That’s what we’ve wanted to show everybody, that we are getting better as a team," said WR Bobby Wade. "Sometimes when you are losing it’s hard to see the improvement, but everyone in here knew it was happening. Now, everybody knows, the fans, the media, the rest of the league."

Todd Haley stepped to a microphone and let out a sigh. What a relief it was to do the impossible and upset the Pittsburgh Steelers. Somehow, the Chiefs did it with a group of no-names, short-timers and a coach who might have come closer than ever to proving some of that progress he has talked so much about.

You will probably read, see and hear a bunch of malarkey about how it was a kinder, gentler Todd Haley directing his team on the sidelines Sunday as the Chiefs faced off against the Pittsburgh Steelers.

Don’t believe it. Todd Haley was the same guy watching his team upset the Steelers as he was last Sunday when his team beat the Oakland Raiders, or the Sunday before that when the Chiefs lost in Jacksonville.

He was a week wiser and smarter, but he was the same Todd Haley.

If the Chiefs have learned anything through this unusual season, it is that Matt Cassel is capable of stunners and letdowns, and his place on that spectrum seems dictated by time and circumstances.

When immediacy matters, Cassel is terrific. When he has time, he needs help. He proved both of those things Sunday, when he led two terrific scoring drives late in a 27-24 overtime win against Pittsburgh.

Cassel comes through under pressure again for Chiefs from KC Star

There could be no more of a dramatic symbol than Sunday’s opening kickoff for how fortunes have turned for Jamaal Charles in the last few weeks.

Charles brought the kick back 97 yards for a touchdown, sparking the Chiefs to a 27-24 overtime victory against Pittsburgh at Arrowhead Stadium.

It was only last month on the very same field when Charles fumbled the opening kickoff and helped the New York Giants score the first touchdown of what would become a lopsided Kansas City defeat.

Charles was then a bit player stuck behind Larry Johnson. He is their featured back now, and the Chiefs expect him to deliver big plays.

A Division III defensive end gets switched to outside linebacker with a new coaching staff installing a new defensive scheme. With 15 games of NFL playing experience, almost all of it on special teams, this young man gets his first NFL start. It comes against the defending Super Bowl champions.

And all Wheaton College’s Andy Studebaker did was earn himself the defensive star of the game, as he grabbed two interceptions, was credited with five tackles and shared a sack of Pittsburgh quarterback Ben Roethlisberger. He also helped knock Big Ben out of the game in overtime with a hit.

In the Chiefs improbable 27-24 victory over the Steelers, Studebaker said hello to the NFL.

"That was a blast," Studebaker said. "What an afternoon."

It does not happen often that a kickoff gets returned for a touchdown; especially for the Kansas City Chiefs. In 49 previous seasons of football, there had been 18 kick return scores by the Texans-Chiefs. That’s about one every three seasons or so.

The Chiefs were due. They were long overdue. They had gone 70 games without a kickoff returned for a touchdown.

Jamaal Charles took care of that. All he needed was 16 seconds. It just so happens it was the first 16 seconds of Sunday’s game between the Chiefs and Steelers.

The throw from Pittsburgh quarterback Ben Roethlisberger wobbled after he was hit by Tamba Hali. Studebaker, two yards deep in the end zone, had plenty of open field ahead of him.

He was hauled down from behind by running back Rashard Mendenhall after covering 94 yards. The play set up a 27-yard field goal by Ryan Succop and allowed the Chiefs to tie the score 17-17 late in the third quarter.

Losing in overtime to a 2-7 team is not something that happens much to the Pittsburgh Steelers. This is a franchise that has won 100 regular season games in this decade.

Maybe that explained the stunned atmosphere of the Steelers locker room after the Chiefs beat them 27-24 in overtime.

"I have to have this football team better prepared to play and ultimately we have to play better than what we played today," said Pittsburgh coach Mike Tomlin. "We are capable of much m ore than that. You have to tip your hat to the Chiefs because they played well enough to win.

"But that’s not what we are capable of and that is not us. It won’t be us. It was us today."

"It was a concussion-oriented thing, so I doubt he was going to come back into the football game," Pittsburgh coach Mike Tomlin said. "I don’t have a lot of information in terms of where he is or his level of availability."

Pittsburgh (6-4) remained a game behind the Cincinnati Bengals in the AFC North after the Bengals were stunned by the Oakland Raiders 20-17. Kansas City improved to 3-7.

Tomlin said he would "accept responsibility" for the loss to the Chiefs.

"We were highly penalized, we turned the ball over in the red area, we gave up big plays, we gave up a kick return," he said.

"When you do those things, regardless of time of possession, yards, whatever, you open yourself up to defeat and that's what happened in that football game."

Steelers shocked by Chiefs in overtime 27-24 from Reuters

If the Steelers appeared confused or looked out of position on Chris Chambers' 61-yard catch-and-run that set up the winning field goal, they were. At least three members of the secondary said they didn't hear the defensive call when the Chiefs went without a huddle. Still, safety Ryan Clark had a chance to tackle Chambers near the Steelers' 35 and failed to do so. "I got to make that tackle," Clark said. "That is a tackle I make every game. I had an opportunity to make the tackle and I didn't. That's what I get paid for."

The first thing Tomlin and his offensive staff have to ask themselves is whether they trust Mendenhall to win a game for them, because even though he nearly had done exactly that without authorization in 60 minutes of 600 Steelers mistakes, they still utilized him in the overtime like he was Plan 9 From Outer Space.

Mind you, there would have been no overtime without Mendenhall.

Without Mendenhall, the Steelers lose in regulation.

It was Mendenhall, lest anyone forget, who had the cardio and the will to gallop more than 100 yards to chase down Chiefs linebacker Andy Studebaker at the Steelers' 8 late in the third quarter. Studebaker, making his first career start, had taken off on a coast-to-coast flight with a misdirected Ben Roethlisberger pass he had collected 2 yards deep in his own end zone.

Steelers forgot about Mendenhall late from The Pittsburgh Post-Gazette

When you hit QB Ben Roethlisberger, he’s got that elusiveness that he was able to get away from you guys. How important was it, not just for the first guy to get there, but also for that second and third defender to get there and try and take him down?

"It’s real important. He’s big. He’s strong. He’s a great QB and he makes a lot of plays on the run, so the more guys you have back there trying to [bring him down], the better off you’re going to be."

Kansas City Chiefs RB Kolby Smith leads the charge this season as he rallies all Red and Gold faithful for the 12th-Annual Chiefs Blood Drive with the Community Blood Center.

Smith will make an appearance during a special Chiefs Tailgate for donors at the Midtown Kansas City, MO Community Blood Center location (4040 Main St.) from 12:00 PM (Noon) – 1:00 PM on Tuesday, November 24. There, the third-year veteran will sign autographs, greet donors and laude the benefits of these individuals’ actions as they prepare to give blood.

mitchholthus Wow....its been a long time coming....huge win for our FANS...the people who have hung in there and bleed RED WHITE and GOLD

JoshLooney winning in SD is a tough task, but how can't u be a believer after today? RT @kelsshae45: think we can go 3 in a row? or is that pushing it?

LooneyonFox: What a great WEEK 11! Glimmers of hope for Detroit and Cleveland ... The Raiders upset of the Bengels, Chiefs of the Steelers. WOW

CaramelFanGurl: #chiefs They F-ing rule. Get over it.

clintonINC: #Chiefs getting some nice air time on the Blitz

tylersterchi: RT: @tommybowman dude on the Chiefs just picked off Roethlisberger and it's his first start out of Wheaton College! Go Thunder!

blondielpn80: Glad the Chiefs won. I was afraid that Mitch was going to forget how to say "TOUCHDOWN KANSAAAS CITY"

DisneyFrankness: @GreenyAndGolic Why can't you give respect to most complete game by Chiefs. ST scores, Offense scores & Defense had turnovers!!!