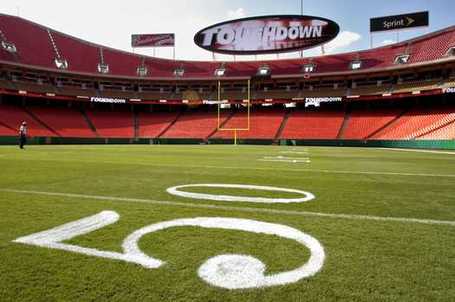 Game Day!!! Steelers are in town (probably with a lot of fans). If you can, head out to Arrowhead and raise some hell for those of us too far away to make it. The team's going to need all the help they can get.

How much the Chiefs might have grown as a team is debatable. They secured victory No. 2 last Sunday in Oakland and got a great deal of help from the Raiders, who like them are one of the league’s bad teams right now. This meeting is likely to show two things: the Chiefs have grown, and they are still very far, far behind the best teams in the league like Pittsburgh.

With his black and gold roots, Todd Haley does not try to hide his admiration of what the Steelers have done through the years, maintaining their place as a contender each year and winning two of the last four Super Bowl trophies to add to the four from days of yore.

"They’re consistent in all areas – personnel, how they draft, all areas," Haley said. "They don’t panic. If things don’t go real well early they don’t panic; they’ve proven that over the years. I think that this model would be a great one to follow as would some other teams obviously; New England being one of those teams and Indianapolis, Philadelphia.

The Steelers didn’t become the franchise they are by losing to teams like the Chiefs. Still, it’s interesting to note that lesser Pittsburgh opponents like Cleveland and Detroit were able to hang in during their games against the Steelers. That’s probably the best the Chiefs can hope for. Despite last week’s win in Oakland, the Chiefs have too many issues to think they can realistically compete with Pittsburgh. They’ve been blown out by many of the stronger opponents they’ve played, and the game against the Steelers has a similar feel. If Pittsburgh comes to Arrowhead Stadium with its best game, there’s little the Chiefs can do to have any say in the outcome. Prediction: Steelers 30, Chiefs 10.

It was years ago when Todd Haley got the book, before the pages were creased and stained with highlighter marks. He still consults it a few times a month, searching for a lost proverb, hunting for validation.

Where would he find it this time? In "The Art of War," where was there an explanation or reason for this?

It is last Sunday. The Chiefs are in Oakland and, as they have often this season, are struggling. Are trying to escape this battle with a rare victory. Trying to earn some of that validation that Haley has turned back more than 2,500 years to find. There is a fourth down, the fringe of a momentum shift, and Haley calls timeout an instant before the ball is snapped. The Raiders fumble, but it doesn’t matter because the timeout nullifies the play. Assistant head coach Maurice Carthon chastises Haley, and Haley returns fire. While television cameras zoom in, the Chiefs’ head coach and his top lieutenant engage in a verbal, R-rated spat.

"He was getting after me," Haley will say a day later, after the Chiefs leave Oakland with a 16-10 win.

Chiefs' Haley coaches by the book from KC Star

I understand personal accountability. And I realize Bowe should’ve never put himself in a situation in which he needed to cut weight quickly.

We want 20-something athletes to be leaders and role models. They’re famous and make a lot of money. You can say the same about the coaches. But we don’t want to hold them to the same high standards as athletes. Coaches and executives create the win-at-all-cost environment.

There are a number of people who view Mark Mangino as a victim. Mangino’s defenders believe his coaching approach prepares young people for a cruel world. It also prepares them to be cruel.

In their desperation to hold onto their money and fame, coaches are becoming more ruthless. The athletes take the majority of the heat. It’s very rare that a situation arises like what we’re witnessing at Kansas. The culture of football rarely gets challenged publicly.

Chiefs fans are so desperate for victories that it’s difficult to discuss the "winning" culture Scott Pioli and Todd Haley are putting in place at Arrowhead Stadium. Bowe’s suspension for PEDs is a reflection of that culture. It is.

Sunday’s contest will mark Todd Haley’s first-ever encounter with the Steelers as an NFL head coach. A graduate of Upper St. Clair High School in Pittsburgh, Haley is the son of legendary Steelers personnel man Dick Haley, who played a pivotal role in the acquisition of 10 Pittsburgh players who are now enshrined in Canton.

Those 10 players were selected to a total of 67 Pro Bowls during their respective careers and are the owners of a combined 37 Super Bowl rings, including one earned by CB Rod Woodson with Baltimore in 2000.

Looking at the Steelers-Chiefs game from Examiner.com

The Chiefs (2-7) will be looking for the upset with a new-look offense. Last Sunday's 16-10 victory over the Raiders was their first since releasing starting running back Larry Johnson, who had originally earned a one-game suspension for off-the-field remarks about head coach Todd Haley on Twitter, as well as some anti-gay slurs on the website.

The offense took another hit on Tuesday, when the team confirmed that wide receiver Dwayne Bowe was suspended for four games for violating the NFL's policy on performance enhancing substances. Bowe had made six catches for 91 yards in the win over Oakland.

Jamaal Charles, starting in place of Johnson, added 103 yards on 18 carries with a touchdown against the Raiders.

"Kansas City is a tough place to play. Their fans are going to be right there from the national anthem, right into it," said Steelers wide receiver Hines Ward. "If we can jump on them early and take their fans out of it, then I think we'll be fine. But it's always hard to win on the road."

The Steelers are coming off their worst offensive performance of the season. They managed only 226 yards against the Bengals and failed to score a touchdown on four trips inside the red zone.

Steelers insist they won't be trapped from The Observer-Reporter

Former NFL receiver Keyshawn Johnson, who played under Haley when he was an assistant with the Jets and Dallas Cowboys, defended Haley's coaching credentials.

"Todd grew up around football. He coached me to two Pro Bowls. His father drafted me with the Jets,'' said Johnson, the No. 1 overall pick in the 1996 draft who now works for ESPN. "Here's a guy that (supposedly) doesn't know anything about football, but I got two Pro Bowls out of him.

"I think he's pretty good. He helped the Arizona Cardinals get to the Super Bowl.''

Experience becomes issue for Chiefs' Haley from The Tribune-Review

In addition to the most recent episode with former Chiefs' running back Larry Johnson, Haley continues to harbor some sort of ill-will towards Kansas City linebacker Derrick Johnson.

So much ill-will apparently, that Haley can’t seem to find a situation or a position on his defense that justifies starting the former first-round selection out of Texas.

Stated simply, Derrick Johnson has been a class act in his time in Kansas City, and one of the Chiefs most productive players. So why isn’t Haley giving Johnson consistent playing time on a team that is 2-7?

But, before there was Leon Lett of the Dallas Cowboys showboating and prematurely celebrating a fumble return for touchdown in the Super Bowl XXVII, or Steelers rookie Plaxico Burress spiking the ball after a 19-yard catch in a 2000 game against Jacksonville when he was not touched down and the ball was still live, or even Philadelphia rookie DeSean Jackson throwing the ball down in celebration a yard shy of the end zone last season, there was Smith and the embarrassing gaffe he committed in an Oct. 18, 1971, game on a Monday night in Kansas City.

Taking a pass from Terry Bradshaw, Smith was on his way to a 50-yard

touchdown against the Chiefs when he raised the ball over his head and triumphantly began to pump his left arm as he neared the end zone. However, before he could cross the goal line, Smith lost control of the ball -- he did not spike it, as some have suggested -- and, instead of a touchdown, the ball rolled through the end zone for a touchback.

To be sure, it was one of the most ignominious moments in Steelers history, a play that has forever dogged Smith's career and almost always is included in a list of embarrassing or boneheaded stunts committed over the years by NFL players.

Suddenly, the big pass play has disappeared from the Steelers offense. After torturing opposing secondaries with long passes in the first six games, the Steelers are finding them harder to come by than swine flu shots.

And maybe the player affected most by the drought is Santonio Holmes, the Steelers' big-play receiver.

To be sure, Holmes has 13 catches for 132 yards in the past two games, including seven for 88 yards in the 18-12 loss to the Cincinnati Bengals. But he has been unable to shake the shackles of two-deep coverage for big pass plays and hasn't caught a touchdown since the season opener against the Tennessee Titans.

almighty31 y ppl so fake these days. actin like they scared to keep it real

ArrowheadPride Yikes! RT @cfromtheict Michigan is TERRIBLE. I think i'd rather watch the #chiefs

JPosnanski What's more amazing? That In 5 years, Weis turned Notre Dame into the Wash. Generals or that he got EVERYONE to despise him.

JBBauersfeld: KU and K-State both lose for the 2nd straight week. Maybe another Chiefs win? Ha

CRS81: Anyone still go to chiefs games other than steelers fans?

Tuggboat: Brodie can't sleep. He is too excited about his first Chiefs game. http://pic.gd/be3bca