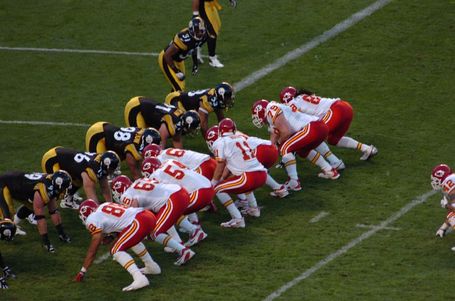 Studebaker will step into the starting spot that for nine games has belonged to Mike Vrabel. For the Chiefs defense, losing the veteran linebacker is a big blow; he’s been one of the unit’s most consistent performers and he provided on-field leadership that is impossible to replace.

When you put the numbers down on paper, it’s quite a change going from Vrabel to Studebaker:

"He’s a great linebacker," Studebaker said of Vrabel. "I just have to go out and be in the right places and do the right things. Maybe over 13 years I can match his production."

That process started early in the third quarter of last week’s game in Oakland. Vrabel left the game because of his injury, and Studebaker finished the game by knocking down a pass and getting in on four tackles as the Chiefs held on for their second win of the season.

"It was not perfect, but that being said, for his first real action it did not appear too big for him," Haley said. "He knew what to do, and he did it. He made some plays, and he was active. Those were all good signs. He did a pretty good job last week, and now he’ll get a chance to build on that.

"He’s been a bit of a bright spot for us. He’s a guy that’s been very good for us on special teams, definitely one of our top three special-teamers week in and week out."

Chiefs LB Studebaker has plenty of drive from KC Star

If Todd Haley looks across the field at Mike Tomlin on Sunday afternoon and feels a twinge of envy, could anybody blame him?

It does seem as though opportunity is served in silver goblets to some people, while others pick through shards and scraps.

Haley's grueling maiden voyage as a head coach in the NFL has been marked by failure, controversy, frustration and setback. He took over the woebegone Kansas City Chiefs, a franchise which had won only six games in two years, and it's been rough sailing for the former Steelers water boy.

But Tomlin stepped happily into Bill Cowher's shoes in Pittsburgh and found a perfect fit. He won the AFC North his first season and the Super Bowl his second.

Struggling Chiefs hoping for 2 straight wins from The Marietta Times

Last week’s win over the Oakland Raiders was perhaps a step in the right direction. But if the Chiefs are truly going to make progress this season, it starts tomorrow against the Steelers. They need to show up. What’s the challenge?

Based on everything we know about the 2009 Chiefs, scoring 14 points against the Steelers should be as impossible as actually beating them. A sobering statistic – Haley’s offense is averaging just 13.25 points at home this year, and that includes garbage-time scores against the New York Giants. Considering Haley won’t have the services of Dwayne Bowe and the Steelers have held six of their nine opponents to 18 points or less this year, it becomes fairly obvious – 14 points would be a huge accomplishment.

Hey Haley – Show Us Something! from WPI

Looking at Sunday's game between the Steelers and Chiefs, one thing stands out more than any - the advantage Pittsburgh holds with their receivers against Kansas City's secondary.

Combined, they don't have the experience of Steelers receiver Hines Ward.

Some might think a 33-year-old receiver running around against a bunch of 23-year-olds might not be an advantage, but Ward is having one of his best seasons and the crafty veteran should be able to teach the youngsters a thing or two.

Ward ready to exploit Kansas City from The Observer-Reporter

A week after the Chiefs finished their practice week on a high note, with what coach Todd Haley said was the team’s best week-ending workout of the season, the team completed Friday’s practice with far less polish.

During the early portion of the practice, Haley worked with the offense and loudly delivered instructions to tight end Leonard Pope, while another tight end, Sean Ryan, saw a pass bounce off his hip.

I know what you're thinking, there's about as much chance for the Chiefs to beat the Steelers on Sunday as there is that Todd Haley and Mark Mangino were in the same Home-Ec class together...

...The following is a simple 'to-do' list for a Chiefs' victory against the Steelers on Sunday:

1. Stop thinking Lance Long is the next Wes Welker.  He's not the next great slot receiver....get over it.  To this point what would make anyone think that?

2.  Design more screen plays for Jamaal Charles.  He's explosive but not a between-the-tackles kinda guy.  Give him the ball in the open field and let his quickness open up the field.

3.  Let Derrick Johnson play the entire game.  It sounds like Vrabel might not play, get over the personal issues with DJ and let the man play.

The Chiefs Blueprint To Beat The Steelers from Chiefs House

Last April, upon its public unveiling, Keyaron Fox was a mite juiced.

The NFL's merry band of schedule-makers presented him a homecoming in late November: a return trip to Kansas City, where he was drafted five years ago, and Arrowhead Stadium, where he began his Sundays journey.

Then he scanned the Chiefs' roster, coaching staff and front office.

Neither are many folks whom this Steelers linebacker and special teams captain knows and remembers.