Chiefs on Larry Johnson: 'This matter is closed'

Share All sharing options for: Chiefs on Larry Johnson: 'This matter is closed' 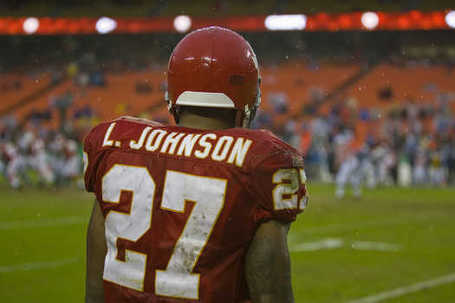 The Kansas City Chiefs have released a statement on the situation regarding Larry Johnson.  Multiple reports surfaced over the weekend that the Chiefs had settled with LJ, instead taking just one paycheck from him.  Peter Schaffer, the player's agent, said that nothing had been signed as recently as Saturday night but did not dispute the reports that an agreement was done in principle.

Consider this the official agreement.  From the Mothership (courtesy of RRDOGuy, who had it first in the FanShots section):

The Kansas City Chiefs, in conjunction with the NFL Management Council, the NFL Players Association and RB Larry Johnson have settled all matters related to Johnson’s recent conduct. Johnson will remain suspended through the club’s game at Jacksonville on November 8th. He will not be permitted to participate in any team activities or be on team premises until Monday, November 9th. This matter is now closed, and the Chiefs will have no further comment.

If this truly is the end of the situation, and LJ faces no further punishment and/or release from the team, then you'll find that plenty of folks will be upset.

And, for some reason (past history, maybe), I don't think this is the end of it.