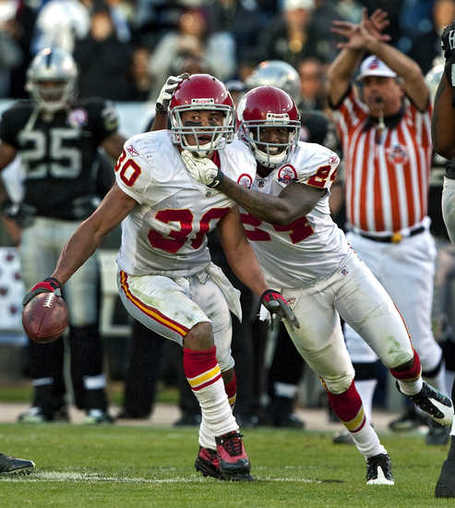 NFL locker rooms are full of physical freaks. I’m not talking circus style freaks, but just remarkable physical specimens. There are little guys who have thigh muscles bigger around than some people’s waists. There are big guys who have enough fast twitch fibers in their body that they can run faster than guys who weigh 100 pounds less.

Lance Long just doesn’t fit. When he walks in the door you expect the security guard to come running in, grab him around the collar and escort him out as a trespasser.

It’s just that the Chiefs wide receiver looks so normal. The 24-year old native of Michigan is listed at 5-11, which is generous; maybe if he’s standing on his tiptoes. Long supposedly weighs 186 pounds, but he must have been weighed after a really big dinner, with a couple rocks in his pocket.

"I’m not the prototypical NFL wide receiver," Long said with a smile.

Longing For The Chance … Thursday Cup O’Chiefs from Bob Gretz

Assembling a successful offensive game plan for the struggling Chiefs was going to be difficult enough for Sunday’s game against the Steelers.

Todd Haley’s task has become harder now that he’s preparing the Chiefs to play Pittsburgh without leading receiver Dwayne Bowe, who was suspended by the NFL for four games for violation of the league’s policy on performance-enhancing substances.

The Chiefs last week lost their leading rusher when they released Larry Johnson. They were able to find a way to beat the Raiders 16-10 with Jamaal Charles rushing for more than 100 yards.

Passing game must adjust to life without Bowe from KC Star

Offensive threats: Pittsburgh is not quite the running machine they’ve been in the past. Mendenhall is the leader running the ball, with 609 yards on 113 carries. RB Willie Parker is closing out his good career and has seen the ball only 61 times so far. Third RB Mewelde Moore can get things done if needed, not only as a runner but as a receiver. WR Hines Ward remains one of the most reliable catchers and blockers at the position in the league. TE Heath Miller is a solid pair of hands for Roethlisberger to find and Super Bowl MVP WR Santonio Holmes brings speed and the big-play element. The Steelers offensive line is average at best, as Big Ben has been sacked 27 times.

The Chiefs could be playing their third straight road game that will be blacked out in the home team's market.

The San Diego Chargers said more than
7,300 tickets need to be sold for their next home game, Nov. 29 against the Chiefs to lift the television blackout in the San Diego market.

With the large number of tickets still unsold, it appears likely that the game will be blacked out in Southern California. It would be the first Chargers regular season or postseason game blacked out since Nov. 7, 2004. Since then, the team has sold enough tickets to lift the NFL’s local blackout of 44 consecutive games.

Chargers fear blackout for the Chiefs from The Red Zone

In their first season of play, the Dallas Texans darkest hours came in a Thursday night game in Boston. On November 18, 1960, Hank Stram’s team got smoked by the Boston Patriots 42-14 in front of a crowd announced as 14,721 at Boston University Field.

Those 42 points were the most the Texans allowed in their first season. The 14 points they scored was their second lowest total of the season and the 28-point differential was their worst loss of the season.

"This was not a good effort for our team," Hank Stram said afterwards to the media. "On offense, defense, we did not get the job done."

Texans Get Smoked By Patriots, 42-14 from Bob Gretz

If there is such a thing as a trap game, that’s what the Steelers have next on their schedule.

This past Sunday, they played the AFC North-leading Bengals. On Nov. 29, they play their fiercest rival, the Ravens.

But in between those divisional foes, the Steelers (6-3) have the lowly Kansas City Chiefs (2-7).

"By looking at the record of the two teams, a lot of people might think this is going to be an easy game for us," Steelers linebacker James Farrior said. "I know the media likes to build it up that way."

On paper, there’s no way the Steelers should lose Sunday at Arrowhead Stadium.

Steelers don't want to get trapped from The Beaver County Times

The Pittsburgh Steelers saw their high-flying offense hit a big stumbling block in their latest game, but have reason to believe it will bounce back at Arrowhead Stadium.

Pittsburgh tries to get its offense recharged Sunday by taking advantage of the lowly Kansas City Chiefs, who look to win consecutive games for the first time in more than two years.

Chiefs vs. Steelers from CBS Sports

So even as the NFL office has hired an outside auditor to evaluate teams' compliance with a set of 43 recommendations it issued this past summer to try to lessen bad behavior by fans, just two of the 32 clubs are complying with the tailgating limit.

Only the Tampa Bay Buccaneers switched to the league's recommended tailgating limit of 3½ hours, according to a team-by-team survey by USA TODAY. The Kansas City Chiefs have limited tailgating to that time frame for several seasons. The other 30 teams continue to allow fans to tailgate for four to six hours before games.

The ominous voices of ticketholders such as Maxson notwithstanding, the NFL says other longtime season ticketholders are the ones who asked the league to clamp down on troublemakers ruining their game-day experience.

More than 16 months after he issued his league-wide fan-conduct code, Goodell says many ticket-buyers are noticing the difference.

almighty31 i had it wit the nonsense.

Adam_Schefter RT @EricStangel: NFL: Raiders bench JaMarcus Russell for Bruce Gradkowski. You know what that means -- they have to reinforce the bench

chrissteuber: I've also learned that scouts from the Chiefs and Saints will attend the Wisconsin, Northwestern game on Saturday.

unroastbeef: Dear KC Chiefs, I hope the beer's cold and flowing at Arrowhead . I will need it to watch the game . I can't do it sober . It's that bad

EcoJock: @JTTheBrick chiefs over the steelers. Chiefs are cleansed after LJ was cut. Don't hassle the Cassel. Chiefs 28 Steelers 17.