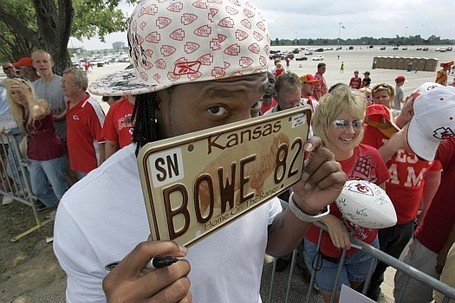 Over the years the Chiefs have had many players who had remarkable athletic talent, and the maturity of a 10-year old. Bowe is one of them. His story of being abandoned as a child by a mother and father distracted and in the clutches of drugs, being raised by his grandparents, running the streets and getting involved in crimes and fights left him without some very important blocks in a solid foundation of being an adult.

That background and then his success in football did lead him away from the drug culture. But there were some stains that could not be erased. Bowe was not suspended for taking illegal drugs or performance enhancing drugs like anabolic steroids. He is gone for four games because he tested positive for a diuretic.

The NFL considers the presence of a diuretic in a player’s urine sample the same as if it was steroids because it has frequently been used as a masking agent.

So Much Talent, So Immature … Wednesday Cup O’Chiefs from Bob Gretz

The Chiefs had won their second game of 2009, and their wide receivers had as much to do with it as anyone. On one side of the visitors locker room at Oakland Coliseum, third-year wide receiver Dwayne Bowe put on a hat, slipped on a pair of noise-canceling headphones and left. On the opposite side of the room, Chris Chambers discussed what it meant to be part of a win, part of an improving wideouts unit, and part of a reliable tandem alongside Bowe. Chambers said that Bowe has plenty of potential. But…

It didn’t take long to understand that Larry Johnson had been looking at the schedule his new will play over the final seven weeks of the 2009 regular season.

One game jumped out: December 27, Kansas City at Cincinnati.

The newest member of the Bengals couldn’t suppress his excitement to face his former team in five weeks.

"I’d be lying if I said I ain’t looking at that game as a game I definitely want to play in," Johnson said. "You take one game at a time, one situation at a time. I’m just trying to get on the field as of right now. If that happens, that’d be the best Christmas gift I can get."

Johnson, released by the Chiefs last week in the aftermath of a suspension for several off-field issues, signed a one-year contract with the AFC North-leading Bengals as insurance for running back Cedric Benson, who suffered a hip injury in last Sunday’s victory over Pittsburgh.

Johnson, clad in a dark Bengals shirt featuring a team logo, told Cincinnati reporters that this "is an opportunity to right some wrongs in my past and have an opportunity to play for a good coach, a good team and a lot of good players that is on this team. For me, it feels like a great fit."

Coach Mike Tomlin said Polamalu's status for the 1 p.m. game Sunday is "questionable at best," but he added that the five-time Pro Bowler's injury is not serious.

"More encouraged than I think we initially anticipated," Tomlin said Tuesday. "There is no setback in regards to his MCL. We're going to take it day by day. (The injury) doesn't appear as significant as the MCL he sustained earlier in the season."

If Polamalu doesn't play against the Chiefs (2-7), Tyrone Carter will start at strong safety.

Cornerback Brandon Carr of Flint had five total tackles in the Kansas City Chiefs' 16-10 win Sunday over Oakland. Carr made a touchdown-saving tackle on the game's second play from scrimmage when the Raiders' Michael Bush broke loose for a 60-yard gain.

Afterward, Bush said he paid too close attention to the stadium's video screen when Carr was in pursuit:
"What went wrong was I looked up at the screen, trying to see who was behind me, forgetting that it's kind of (a) couple seconds' delay."
Flint's Brandon Carr key contributor in Kansas City's win over Oakland from The Flint Journal