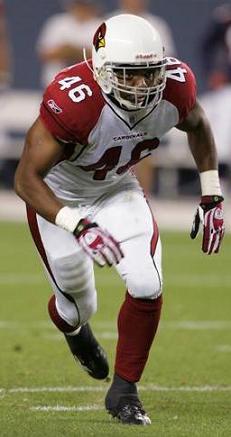 No one will ever read it but I had just finished typing a post on the Chiefs open roster spot and expecting it to be filled quickly.  Well, I was right (even if I can't prove it).

The Chiefs have signed Tim Castille, a 5'11" 242 pound RB/FB most recently last season in Arizona under the Haley-led Cardinals offense.

Castille only caught four balls for 11 yards in 14 appearances last season, his second since being an UDFA out of Alabama.

In my aforementioned post that I now can't publish, I guessed the next Chief would not be a RB.  So far I'd say the running game has improved, kind of an addition by subtraction with the release of Larry Johnson.

Castille was originally brought onto the Cardinals in 2007, and then released on September 5th of this year, the final cutdown day.

His Chiefs connection is of course Todd Haley.