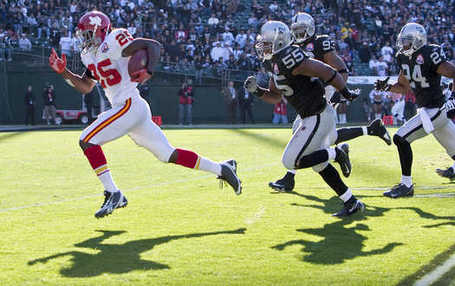 In the interest of catching a train, today's post is tweet-free. I know everyone will be very disappointed, but we'll be ok. =)

Peter Schaffer wrote in an e-mail that Johnson's deal would be finished early Tuesday, a day after Johnson reportedly was in Cincinnati to meet with Bengals coaches. Reports surfaced Monday that Johnson, who was released last week by the Chiefs after 6 seasons, was being courted by the Bengals after running back Cedric Benson suffered a hip injury in Sundays win against Pittsburgh.

Larry Johnson to sign with Bengals from KC Star

Good one from Gretz. Haley was responsible for the 4th down defensive time out.

But Haley’s call for the timeout and the snap of the ball came at the same time. JaMarcus Russell tried a quarterback sneak and did not get the necessary yardage. The Chiefs defense thought they had held. But the officials waved off the snap and awarded the timeout to Haley.

That drew a comment from Carthon, and that brought a reply from Haley, and that’s when they started exchanging friendly words said in unfriendly ways.

"When I was an assistant," Haley said Monday, "I had all the answers."

Those answers are proving more elusive to Haley in his first year as the Chiefs’ head coach. Many of his game decisions have been puzzling, and not merely because they haven’t worked out in Kansas City’s favor.

"It’s difficult," Haley acknowledged. "Ultimately, you’re responsible for how they all turn out."

One game into the post-Larry Johnson era is all it took for the Kansas City Chiefs to get their first rushing touchdown, first 100-yard rushing day and second win of the year.

This week's opponent, the Pittsburgh Steelers, may mount more of a challenge than the mistake-prone Oakland Raiders did in Sunday's 16-10 victory.

But the Steelers would be wise to prepare for Jamaal Charles as KC's featured back. It would seem a richly deserved reward for his long TD run and 103 yards rushing in the first game since former Pro Bowler Johnson was released amid a cloud of controversy.

WHAT WE DON'T KNOW:

1) How long it will take the Chiefs to get a first down next week when the Pittsburgh Steelers come to town after taking it on the chin against Cincinnati? Offensively the Steelers couldn’t do anything and they lost the heart of their defense, safety Troy Polamalu, to injury again. Polamalu will miss next weeks’ game.

Haley called one of the most beautiful games last year in the Super Bowl and took Pittsburgh to the final minute, and I’m wondering if he can do it again to keep this team competitive? Granted, we don’t have the talent Arizona has on offense or defense, but we still need to attack the Steelers.

The replica jersey of Kansas City Chiefs running back Larry Johnson was selling for $80 a pop last month at Dick's Sporting Goods stores.

How quickly the star athlete can fall.

On Sunday, three dozen Johnson jerseys at the Independence Dick's store were marked way, way down -- to $9.97 each.