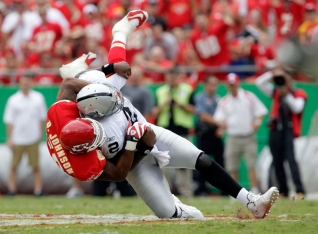 Game Day!! Late game today (which makes me wonder why I'm up after 3 hours sleep to do this post). After a good week of practice our boys get another chance at JaMarcus the Hut. Let's all hope for a win.

In other news, a special shout out for my favorite bartender. She's a year older today. Happy Birthday, Lauren!

Going back to bed. Go Chiefs!!

At this point, isn’t Haley reluctant to identify a top-notch practice when he’s been saying that for the last month and the Chiefs went 1-3 come Sunday afternoon? Does he think twice about mentioning, or even thinking about the quality of the work on Wednesday, Thursday and Friday?

"Yes I do," Haley admitted. "But you can’t think any other way. You really can’t. You’ve got to assume that good practices are eventually going to translate into good play. If you think any other way I think you’re asking for trouble. I know that’s how we gauge how a week has gone."

Three months ago, it wasn’t just an upset that Wallace Gilberry would be tied for the Chiefs’ lead in sacks at the season’s midway point.

It was an upset that Gilberry, an undersized defensive end, would merely still be with the Chiefs. He joined the team last season only because a rash of injuries left them short of bodies at his position, one they fortified during the offseason when they drafted Tyson Jackson and Alex Magee and shifted Glenn Dorsey from tackle.

But Gilberry survived and for that, the Chiefs should feel fortunate. Their pass rush is still mediocre at best but in large part because of Gilberry’s three sacks — he’s tied for the team lead with Tamba Hali — the Chiefs head into today’s game at Oakland having matched last season’s total of 10 sacks.

Games between these two offensively challenged teams often are difficult to forecast because they come down to big plays. Who could predict the fake field goal that turned last year’s game in Oakland? The Chiefs should have beaten the Raiders decisively the last time around but were far too generous with the penalties and turnovers. If they maintain their discipline and make Russell cough it up a couple of times, this is their game for the taking. Prediction: Chiefs 16, Raiders 13.

When the Raiders and the Kansas City Chiefs play today for the 102nd time in their 50-year histories, seeing concrete signs of progress in their rebuilding might be as important as winning the game.

"What I know is we're making progress," Chiefs first-year coach Todd Haley said in a conference call last week. "And I know this is the beginning of the process for me and for this team. It's not the middle, it's not the end, it's the beginning."

Progress is a term used often by Raiders coach Tom Cable, as well. It's what you look for when your team has won only 26 of its past 104 games.

"When you start talking about rebuilding, I don't really understand that," Cable said. "But, are you "... getting better? Are you progressing? And are you starting to turn the corner where you win?"

Somehow, "flex scheduling" doesn't quite do it justice.

Rather, if it were possible, perhaps the NFL would consider simply ignoring the fact that one of its games is actually supposed to take place this weekend on the West Coast.

Or instead of onto its flagship, self-named cable network, maybe the league could jettison the clash from CBS toward some other unsuspecting entity - like VH1 or the Travel Channel.

Either way, it's difficult to underestimate the debacle that could unfold.

When the one-win Kansas City Chiefs visit the two-win Oakland Raiders, it'll be a stark reminder for both franchises of just how far they've each tumbled since halcyon days earlier in the decade

Todd Haley's inaugural season in KC has been rocky, to say the least. The rookie head coach's high-powered spread-oriented offense imported from Arizona simply hasn't taken hold. Without a suitable offensive line, the humiliating running attack so often associated with previous Chiefs teams has also been nonexistent. Not fearful of the run, defenses have keyed the pass with considerable success. As a result, Haley's club has only bested Cleveland and Oakland in total offense averaging a pathetic 257.8 total yards per game.

But with the Chiefs' Negative Nancy searching for employment, things are looking up for the offense, especially the rushing attack, at least temporarily. Whenever Oakland is in town supressing optimisim is difficult.

Though Jamaal Charles has performed admirably when provided opportunities his chances have been limited. It appears Haley is dedicated to a committee approach - good news for Kolby Smith.

The way we hear it, Haley and his staff have done nearly a complete turnaround on Dorsey and now view him as part of their future along the defensive line. Formerly a D-tackle, Dorsey might not have the speed or body type to be a prototypical 3-4 end, but he's gotten his weight down below 300 pounds and has proven to have a better grasp of the position than many thought he would, creating a good push up front and holding the edge against the run.

almighty31 we comin for heads if u aint know.

Adam_Schefter Why the NFC playoffs could be played all indoors, and the Chiefs decision to keep Larry Johnson over Jared Allen http://is.gd/4UfkK

kb_kcstar I've found a place in California that serves grits. Good God, this is great.

brettramirez: i am going to sleep.. gotta drive to Oakland tomorrowto watch the Raiders/Chiefs game! GO CHIEFS!!! lets see if i make it out of this one!!