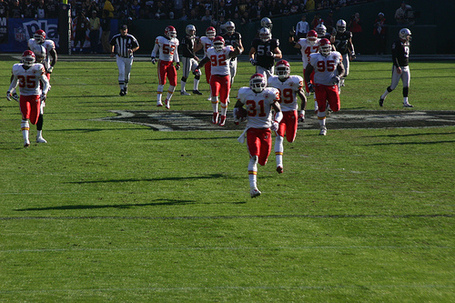 When the Chiefs and Raiders face off on Sunday at the Oakland Alameda County Coliseum two of the best players on the field will be the punters.

That doesn’t just say something about the lack of talent on both of these rosters as evidenced by their combined record of 3-13.

It says something about the punting renaissance that the pro football has experienced over the last three years. At no time in the history of the game have there been as many good punters in the league at the same time. From Lechler and the 49ers’ Andy Lee in the Bay Area, to Colquitt and Donnie Jones over in St. Louis, with San Diego’s Mike Scifres, Buffalo’s Brian Moorman and the old crafty veteran, Jeff Feagles with the New York Giants.

What has led to this glut of talent and top performances?

Chiefs coach Todd Haley said Friday that Kolby Smith could start at running back Sunday at Oakland, but he didn’t commit to a starter, saying the first offensive play could influence the decision.

Smith was activated last week after missing the previous year while rehabbing from a knee injury. Jamaal Charles and Dantrell Savage are the Chiefs’ other options.

Smith could start at running back against Raiders from KC Star

In the first quarter, Denver QB Frank Tripucka led his offense on a 46-yard touchdown drive that gave the Broncos the first points on the scoreboard.

But on a balmy afternoon at the Cotton Bowl, the Dallas Texans defense shut the door, and running backs Abner Haynes and Johnny Robinson took over on the offensive side and Hank Stram’s team had a 34-7 victory. The decision pushed the Texans over the .500 mark on the season, as they came out of the game with a 5-4 record.

The Dallas defense tied the score in the second quarter. LB Smoky Stover hit Denver RB Don Allen in the left flat as he was catching a pass. The ball bounced in the air and CB David Webster grabbed the ball and returned it 40 yards for a touchdown. It was one of four interceptions in the game for the Texans defense.

In fact, half of Kansas City's wins in its last 34 games have come at the Coliseum with victories in 2007 and '08. The Chiefs are 2-30 in that span when not playing in Oakland, including three home losses to the Raiders.

``The last three or four years it's been like that,'' Kansas City linebacker Derrick Johnson said. ``They win here and we win out there. But each game is its own game. We can't put it in the basket that we're going to win. We've got to go out there and do it.''

Most of the Chiefs' wins in Oakland have been close, with Kansas City winning five of the six by seven points or fewer.

The Chiefs won last year by turning a botched fake field goal by Oakland into a 67-yard fumble return for a touchdown.

KC is just 3-7 ATS in their last 10 games overall, but they’ve gone a stiff 13-6 ATS on the road in the past 19 trips away from Arrowhead. Matt Cassel hasn’t been returning on the investment the Chiefs laid in to him this summer, but finally he has a viable veteran receiver in Chris Chambers who excels at receiving the deep ball that Cassel throws well.

Does Anyone Still Care Game of the Week: Kansas City Chiefs vs. Oakland Raiders from BetUs.com

A media throng gathers around wide receiver Chaz Schilens every time he enters the locker room these days. It's a safe bet that he's going to be just as popular with defenders every time he's on the field Sunday against the Kansas City Chiefs.

The Raiders are pinning an inordinate amount of emphasis on Schilens' successful return from a broken bone in his left foot as a basis for improving their fortunes in the second half.

Time will tell. Schilens has yet to play in a game this season because of the injury he suffered during training camp. The Raiders' passing game has languished without a suitable replacement.

But I think this Chiefs-Raiders game has a chance, a real chance, to be the worst ever, and it begins with the rivalries point: The Chiefs and Raiders make up one of the official rivalries in sports. This isn't some nondescript matchup between Tampa Bay and Carolina. Sure, those two teams on any given day could give you a harrowing football game. But they can't give you that transcendent bad football experience that we want.

The Raiders and Chiefs can. This is a rivalry that goes back to the very beginning of the old AFL. These were the first two teams to represent the AFL in the Super Bowl. The first year the Chiefs were in Kansas City -- that was 1963 -- they played the Raiders in back-to-back games only five days apart. The Raiders beat the Chiefs 10-7 in Oakland and then drubbed the Chiefs 22-7 back in Kansas City. The next year, the Chiefs beat the Raiders 21-9 and 42-7. Already they despised each other.

The Worst Football Game Ever? from Sport Illustrated

almighty31 imma turn u into sushi, n u got ur style from Gucci. like jodey breeze lmao. say somethin

JoshLooney RT @busymom4kc: It's Raider Hater Week! I'm ready for my #chiefs to put a hurting on the Raiders AND I believe it can be done this Sunday!

PatrickRWaters: @ricksavage I prefer the loser bowl that is the Chiefs vs Raiders.