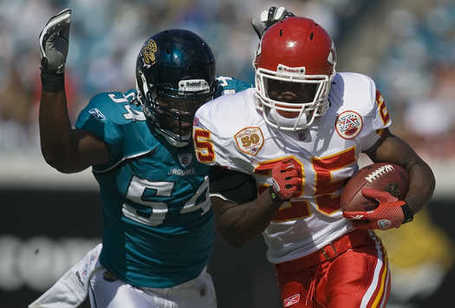 Two things this morning. First, this will be a short version of this post, mostly due to the fact that I am hungover as hell and tried to milk every last second of sleep. Secondly, Jay Cutler: hahahahahahahahahahahahah!

Proving that he’s willing to follow the program as set up by Haley, Niswanger refused to talk about the injury and specifics. All season he’s been guarded about his words with the media, especially when it comes to the offensive scheme and injuries. It’s Niswanger trying to be a good soldier.

Unfortunately that doesn’t flesh out what a remarkable comeback he made. When Niswanger was helped off the Arrowhead Stadium field on October 25th and examined by Chiefs doctors, the prognosis was not good. Multiple ligament damage was expected and his wife Patricia was seen leaving the stadium with tears in her eyes. Those in the locker room after the game who had seen their teammate indicated that his season was over.

Chambers is the latest new wide receiver for Cassel to learn, and Cassel is the newest quarterback for Chambers to learn.

"You’d love to develop some rapport and a relationship with your receivers," Cassel said Thursday.

It helped this last Sunday, when Cassel and Chambers connected for two touchdown passes late in the fourth quarter. Chambers didn’t know the terminology for his routes. Cassel had to translate. Somehow, it worked.

Chambers, Cassel try to be on the same pagefrom KC Star

Last time vs. Chiefs: back on September 20, the Raiders walked out of Arrowhead Stadium with a 13-10 victory, despite the fact the Chiefs had a 409-166 edge in offensive yards and a 25-11 edge in first downs. S Michael Huff picked off a pair of QB Matt Cassel’s passes. It was the best rushing day of the season for the Chiefs, as they ran for 173 yards on 38 carries. Raiders QB JaMarcus Russell was awful, completing just seven of 24 passes for 109 yards. Oakland punter Shane Lechler averaged 56.9 yards on seven punts.