Is Larry Johnson in Dallas?

Share All sharing options for: Is Larry Johnson in Dallas?

Update 2:45 PM: Per Kent Babb: "LJ's agent, Peter Schaffer, tells me that LJ's visit to Dallas is a "coincidence" and was a "social business" trip. Whatever that means."

We've got a big time rumor for you this afternoon. Heck, I wouldn't even call it a rumor because we don't want to jump into that game right now. Let's call it total speculation.

Kent Babb on Twitter has alerted us to the fact that Larry Johnson's reported location on his Twitter page - which is updated automatically via the GPS on a cell phone  - is..... 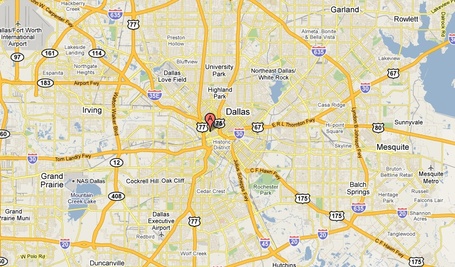 The Cowboys new stadium is about 25 miles west of Larry's apparent location.

So is Larry Johnson really in Dallas right now? Probably. Is he there meeting with the Cowboys? I have no idea. It's all pure, 100% speculation at this point. Larry could be doing any number of things related to personal travel or business down in Dallas.

Still it's fun to think we have a lead on these players via their Twitter accounts. Larry should just stop using Twitter entirely.

H/T to NJ Chiefs Fan in the FanShots.