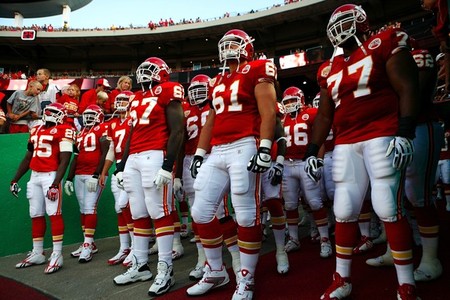 Having some issues this morning with posting. Not sure if it's the site or my connection. Very short Arrowheadlines today so I can get to work. From what I've seen, there isn't much out there besides the basics of the LJ story and some speculation on where he will land. Not much new from last night.

If you think that Johnson was released because of his Twitter comments about Todd Haley you would be mistaken. On the list of L.J. transgressions, talking about his coach’s history as a college golfer was barely a blip on the radar screen. Haley was not perturbed by the comments and they mattered little in the discussion involving Johnson’s future.

It is safe to say that the best relationship that Johnson had with a Chiefs head coach was with Haley. He never connected with Dick Vermeil and Johnson was in many ways the anti-Herm Edwards. What L.J. thought was important, Edwards had no use for. As a son, husband and father of two young daughters, Edwards had a hard time understanding Johnson and his treatment of women. For Herm to bring the hammer down on L.J. last year for his attitude, his arrests and his tardiness spoke volumes. If Edwards had survived as head coach, Johnson would have been gone back in February.

When the talking was finished, the consensus was that Johnson, once one of football’s top running backs, had to go.

The Chiefs called Johnson with their decision about 7:30 a.m. and quickly moved to eradicate any physical evidence he ever existed. By lunchtime, his practice-facility locker had been stripped of its name tag and cleaned out. Left behind were three white towels neatly folded and stacked, and a few clothes hangers.

Erasing Johnson’s aura will be more difficult for the Chiefs. Johnson is second on the Chiefs’ all-time rushing list, only 75 yards from the top spot.

But he will be remembered more for the repeated off-field incidents during his 6 1/2 seasons that turned him into a continuing disruptive force inside the locker room.

But, best I could tell, they did not admire him. They did not respect him. They did not take pride in having him as a teammate. How could they? And I don’t just say this because of the off-the-field stuff — the arrests, the drama, the Twitter rampage.

No, more, they didn’t respect the kind of football player Larry Johnson was. He could not catch. He did not block. His effort seemed intermittent. He griped constantly. You think there was a single guy on this team who pointed at Larry Johnson and proudly said: "That’s what the Chiefs are about"?

No. And yet he is exactly what the Chiefs have been about. For five years, with Priest Holmes, the Chiefs were built around an overachiever who once chased a defensive back for 100 yards after an interception in the desperate (and futile) hope that he could catch him. The last five years, with Larry Johnson, the Chiefs were built around a one-dimensional back who had to be taken out on third down and who made more headlines for getting suspended than scoring touchdowns.

It wasn’t entirely or even mostly Johnson’s fault the Chiefs got worse every one of those five years — the team really collapsed around him. But when a team’s marquee player is a gigantic pain in the neck on and off the field, well, those teams tend to be losers. There aren’t many exceptions to that rule.

Posnanski | Chiefs turn their back on LJ, who didn't carry team's respect from KC Star

The NFL will not add to Larry Johnson's punishment for making anti-gay remarks on his Twitter account or to reporters in the Chiefs locker room.

The Chiefs suspended Johnson for two weeks _ one week without pay _ for his remarks and criticisms of coach Todd Haley and released him on Monday.

According to NFL senior vice-president Greg Aiello, that was sufficient.

"The club took disciplinary action in this matter,and we determined it was appropriate," Aiello told The Star in an e-mail

The Chiefs’ release of running back Larry Johnson is expensive for the team but lucrative for the player.

Johnson is eligible to receive the remaining portion of his $4.55 million base salary from the Chiefs. Players are paid weekly through the 17 weeks of the regular season, so Johnson could collect about $2.14 million over the season’s final eight games.

To get the money from the Chiefs, Johnson must pass through the NFL’s waiver system. The waiver period concludes this afternoon. If Johnson is claimed by another team, that team assumes responsibility for his contract and the Chiefs owe him nothing more.

Johnson’s release will cost Chiefs some money from KC Star

If Larry Johnson has any immediate future in the NFL, it could be in the NFC East.

Washington coach Jim Zorn said Monday that Portis is doubtful for this week’s game against Denver and the team has had internal discussions about Johnson.

"I talked to Clinton Portis (on Monday morning), and he has a headache," Zorn said. "We have to be very cautious with a concussion."

The Eagles have taken a cautious approach with Westbrook as well. Rookie LeSean McCoy, starting in place of Westbrook, had 54 yards in 13 carries in Sunday night’s loss to Dallas. He leads the Eagles in rushing with 348 yards in 83 attempts, a 4.2-yard average.

Next stop for Johnson could be NFC East from KC Star