Share All sharing options for: The Five Best Games of Larry Johnson's Career

Just think. In a couple of weeks, all of this Larry Johnson drama will have died off and then what will we have to talk about?

So we're riding this Larry Johnson media blitz for all it's worth and giving you some more remembrances of #27 that may have slipped your memory.

I know, I know. It's not fashionable right now to talk about anything positive that Larry Johnson did but amidst the dark times, there were bright rays of light here and there.

I'm talking about the games when it was fun to cheer for Larry Johnson and the Kansas City Chiefs. You know, going back to 2004ish the Chiefs were pretty darn good. I know, my memory is foggy too. Tough to remember those times nowadays.

For a period of about two seasons, Larry Johnson and the Chiefs crushed opponents on the ground. It just wasn't fair. It got to the point when I would check the box score and it was completely normal to see LJ rack up 150+ yards rushing. Those were the days.

So let's step out of our I Hate Larry Johnson Attack Mode for a minute and remember some of the best games LJ ever had as a Kansas City Chief. These are good memories after all.

It's all there in chronological order, after the jump. 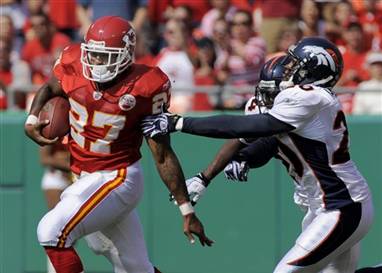 Larry Johnson had a couple of nice games before the Chiefs' Week 15 match up with the Denver Broncos. But this week was his coming out party - 30 rushes, 151 yards and two touchdowns. Dante Hall added one carry and Omar Easy had four. The Chiefs destroyed the Broncos 45 to 17.

Included in those yards was a 32-yard TD run by Johnson.

"No one's ever doubted he could play," Chiefs coach Dick Vermeil said. "He needed a better opportunity, and he needed to grow up." 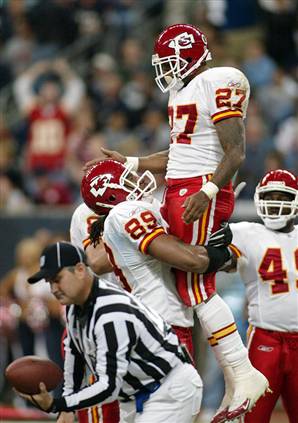 Richard Carson / Reuters
Kansas City Chiefs running back Larry Johnson is lifted into the air by teammate Jason Dunn after Johnson's touchdown in the first half on Sunday. Johnson rushed for a team-record 211 yards. (via MSNBC)

This is still back when the Chiefs offense was murdering opposing defenses. And Larry Johnson took great advantage of the talent around him.

Against the Texans on the road, LJ rushed for 211 yards on 36 attempts and tacked on a couple of rushing touchdowns. This was the third game into Larry's forthcoming string of amazing games at the end of the 2005 season. He finished the '05 campaign with 1,750 rushing yards and twenty-one total touchdowns.

Johnson was supposed to come into the interview room after the game, but then told Chiefs officials he wouldn't talk.

"We were looking for big things from him," Chiefs quarterback Trent Green said. "It's very important for him to come up big. When Larry's had opportunities to play, he's played well."

At this point, in Week 15 of the 2005 season, we knew we had a special running back on our hands. LJ rushed for 167 yards on 31 attempts. He ran it into the end zone twice in what would become his characteristic workhorse fashion. Larry averaged 30 attempts per game through the final seven games of the '05 season.

The Chiefs would lose this game to the Giants 27 to 17. But it wasn't because of Larry Johnson. It was because the Chiefs forgot how to tackle and gave up 220 yards rushing to Tiki Barber. Yeah, it was that game.

From The Sporting News on 12/30/2005: The punisher: Kansas City's Larry Johnson has been virtually unstoppable

Johnson has done the same thing for the Chiefs as their feature back. Since a season-ending injury to Holmes, he has seven straight 100-yard rushing games--including a 211-yard performance against the Texans-and is establishing himself as a big-time runner and the force who is keeping the Chiefs on the outskirts of playoff contention.

It's hard to find fault with Johnson as a runner. He is aggressive and seeks confrontation. Unlike Holmes, Johnson can make his own hole when one isn't provided for him. 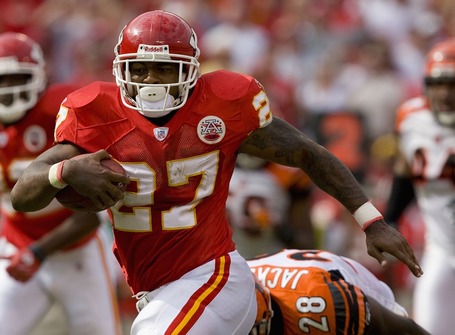 In the Chiefs' tenth win of the season, LJ angrily stomped all over the Cincinnati Bengals. He rushed for 201 yards on 26 attempts. That's an eye-popping 7.7 yard per carry average.

Larry would also have three touchdowns and if you remember one of those was a 49-yard run. That was LJ's first of two touchdowns in the first half. This is possibly LJ's most dominating day on the football field.

On a nine-yard run in the second quarter RB Larry Johnson set the Chiefs single-season rushing record, bypassing the previous mark of 1,615 yards established by RB Priest Holmes in 2002. Johnson finished the season with 1,750 rushing yards. He also produced 2,093 yards from scrimmage, the fourth-best seasonal total in Chiefs history.

It's the middle of the 2006 season. We're in full on, survive with Damon Huard mode. It's the Chiefs and Seahawks. What do you do?

Hand the ball off 53 times, 39 of those to Larry Johnson. LJ would rush for 155 yards on four total touchdowns on that day - three rushing one receiving.

Larry would rush for 172 yards the next week against the Rams and would have a handful of great games after this one. But it's tough to top a game where the coach basically rides you to a one touchdown victory under less than ideal quarterback conditions.

Yeah, I'm glad Larry Johnson isn't a Chief anymore. It got to the point where keeping him around was disrespectful to what the Kansas City Chiefs stand for.

But...for a couple of seasons, Larry Johnson was one of the most dependable, consistently producing running backs in the NFL. And that's what this post is about - looking back at the days when it was fun to cheer for Larry Johnson, not against him.

Reminisce away AP readers. I know a lot of these games won a lot of fantasy football games for you guys.