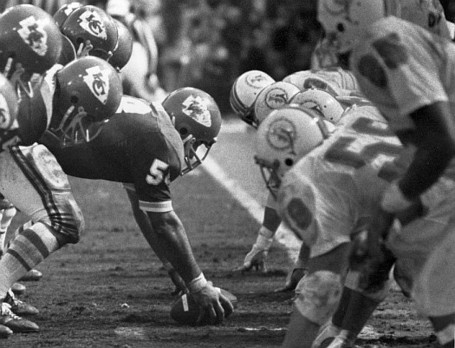 Good Morning AP. No game today as I hope you all know. With recent quotes from Haley about changing the O to make it more effective, I'm wondering if my prediction that the bye week would bring in the Arrowspread is at least partially true. Not only is this a good time to make changes because of the bye, but they had an extra hour last night to review tape.

Instead, he was approached by a couple of reporters who sought his opinion. As part of the Chiefs celebrating their 50th season, The Star selected its All-Time Chiefs team, and who better to ask for comments on the picks than Dawson?

Dawson, the franchise’s star quarterback from its final season in Dallas in 1962 until he retired in 1975 and later a Hall of Famer, has either played with or broadcast the games of just about every player who has worn a Texans/Chiefs uniform. So his insight on the selections was instructive, and he even helped settle some disagreements.

Clearly, Larry Johnson is not there. By no means will I pretend to be a mentor, an advisor, or the second coming of Sigmund Freud, but I can only see a pattern in Larry Johnson’s behavior that is similar to what I saw in Agassi and Fleury. I don’t know if he’s covering something up; I don’t know if he has issues more complex than those that show; and I don’t know if he’s just plain angry. What I do know is that he is not "old-school"; he’s human, and I’m worried about him. It has nothing to do with the football player because I can very well survive with one less running back in my life; what I’m talking about is the big picture. We can’t get enough good people running around our lives.

The trail is probably going to get tougher for Johnson; he’ll probably be gone at the end of the year if not sooner. Given the red-flags raised all around the NFL, it will become really difficult for him to locate another team that is willing to find out that he has developed cutback moves to go along with his north-and-south style.

Maybe it’s necessary for him to tumble. Maybe a fall from grace will represent the growing pains. Maybe that’s why he wants out. No one could tell for sure that if Jared Allen had stayed and Johnson had left instead, Allen would be sulking and Johnson would be thriving; speculation is the capital of a territory that’s far from reality.

Larry Johnson recouped some money Saturday, but his “settlement” with the Chiefs didn’t answer questions about his long-term job security with the team.

Johnson’s agent, Peter Schaffer, told The Star on Saturday night that his client and the Chiefs had agreed in principle that Johnson would remain suspended for two weeks but that he would be paid for one of those weeks.

The original suspension, which was handed down by the team Wednesday night, would have cost Johnson more than $600,000. Now it will cost him about half that, and it will keep the sides out of a grievance hearing next week.

“We have nothing signed,” Schaffer said. “I don’t think anybody is going to go back on their word.

“We’ve got an agreement that, in my mind, is a positive resolution that allowed all sides to move forward.”

Larry Johnson’s fine is cut in half from KC Star

Most of the book is basic stuff that can be found in dozens of other books written by or with the help of the athlete. What makes Moon’s book a bit different is that he did not try to sweep under the rug or ignore some of the bumps in the road that came in his life. In fact, he talks at great length about the altercation with his first wife which led to him being charged with spousal abuse. He also covers his arrests in the last few years for driving under the influence while living in Seattle and working as a color commentator for the Seahawks Radio Network.

In a chapter titled “Not Perfect,” Moon recounts his arrest in July 1995 for spousal abuse.

The case went to trial and his then wife Felicia testified in his defense and the chargers were dropped. It’s what happened afterwards that makes Moon a bit different. As he and Felicia were going through the divorce process, Moon began to attend counseling sessions.

With the Chiefs’ bye week coming near the mid-point of the season, it allows everyone an opportunity to stop and reflect. From the coaches and players to the fans and media, we all have a chance to look back and assess how things have gone, and – perhaps more importantly – take a look at what’s yet to come.

Where The Chiefs Stand from WPI

Nobody likes a bully. There can be little appreciation for those who use strength or power to harm and intimidate the weak. Unless, of course, you're talking about the NFL.

Morality goes out the window in pro football, where the preferred tactic is to rub snow in the face of an opponent, kick 'em when they're down and offer a smelly armpit of solace.

A week after helping Cedric Benson up and returning the shoe he left lodged in their collective facemasks, the Bears welcome the woeful Cleveland Browns to Soldier Field today. The formula for victory is simple: Jump on them early, keep a foot on their throats, win at all costs.

League breaking down into haves, have-nots from Chicago Sun-Times

Karen Martin had a similar take: “I fail to understand why, when a person makes a remark that includes a hurtful and derogatory word to describe a black person, it must be abbreviated (the ‘n-word’), but when a remark is made that includes a word about a gay man that conveys that same hurt and degradation, it’s still OK to use the complete term. Why is it that you can print the ‘f-word’ in its entirety without qualms?”

In reality, there is no rule set in stone about when a word should appear in full or instead by abbreviation or description. Everyone would have probably gotten the point if the stories had mentioned “common slurs directed at gay men” instead of printing the actual words.

But this isn't just an X's and O's tribute to Vermeil. Forbes goes behind the scenes to find out what made the complex coach tick and eventually what made him a ticking time bomb. Vermeil declined to be interviewed for the book (he told Forbes he didn't feel his life story was worth telling), so the author fell back on an old journalist's trick - if your subject won't talk about himself, find other people who will. And that's what Forbes did, interviewing coaches who worked with and against Vermeil, as well as dozens of his former players with the Eagles, St. Louis Rams and Kansas City Chiefs.

Even though Vermeil finally won a Super Bowl with St. Louis and ended his coaching career with Kansas City, this is definitely a Philadelphia story. Of the book's 14 chapters, 10 deal with Vermeil's rise and fall with the Eagles.

What drove Vermeil - to the brink from The Philadelphia Inquirer

almighty31 in the crib. swing by. txt cause i cant hear. lol

ArrowheadPride And I see our first LJ costume.

bemonteer: @chiefsbuzztap : Larry won on tha Is deal. Chiefs should have fought it.

AnjilasDad: @SI_PeterKing LJ is an arrogant punk, a jerk fm day 1 who likes to beat women. Now his susp is cut in half, Chiefs have no balls.

sumyunguy: How in the world is it possible that the #chiefs Larry Johnson is 75 yards away from being the franchise record holder for rushing yards?

johnbuenger: What a great Sunday. We set the clocks back and I don't have to lose my mind watching the Chiefs.