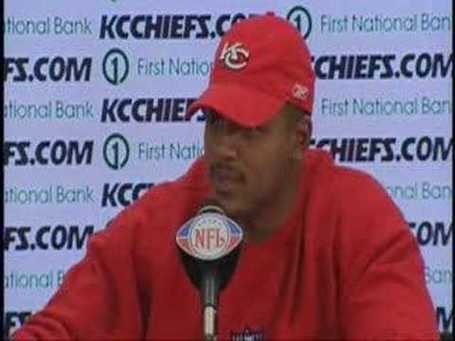 Last Thursday Larry Johnson's agent appeared on the Chris and Cowboy show on Thursday night.  He talked about a few things with LJ (this was before a settlement had been reached), including this, uh, strange exchange.  Peter Schaffer, the agent, was trying to, I think, prop his client up and it didn't really come off right (to me).

Schaffer brings up the Herm Edwards "You play to win the game" video as one of the greatest videos.  And only that video of LJ mocking Herm tops it commenting, "it's funny stuff now."

If you read this out loud, it's a couple of minutes, running on about some video from three years ago. I understand he's trying to defend his client in the public but it's becoming harder and harder to defend this guy.

You can listen to the interview here.  Here's what he said about the LJ and Herm videos.

"The thing is about Larry, and I've known him now since he came out of college, [is that] he can be a very clever, funny and intelligent person and when he lets his guard down he really is...," Schaffer said to Chris and Cowboy on 610 Sports on Thursday night.

"One of the greatest videos of all time is the Herm Edwards 'We play to win the game'.

"But a video that's even greater than that is Larry Johnson playing Herm Edwards and saying 'We play to win the game'.  It was fantastic.

"It showed the side of Larry that I know is there that to me, and I'm not just saying it because he's my client, that was one of the most clever football videos taking a shot or a caricature of your head coach where the head coach said 'You know you just made fun of me and I'm laughing harder than anyone in the room'.

"That takes talent and intelligence and that's the Larry Johnson I know.  And I just want to make sure he continues to be more of that person.

"I know he, as much as anyone, was upset about losing on Sunday and sometimes people get frustrated and that's what happens.

"But if you look at that video of the Herm Edwards portrayal, it's funny stuff now."