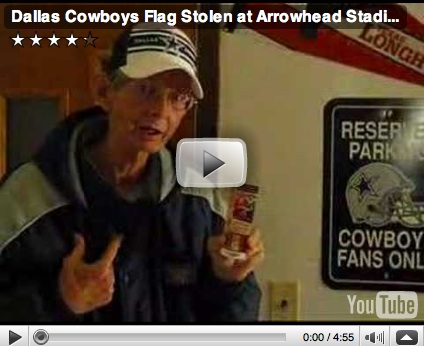 Before you go clicking play, this is just a picture of this video. The actual video has been removed for reasons we'll explain in a minute.

Back in December 2007, I came across what was in my opinion one of the greatest videos ever posted on this site. Hopefully you caught it. The description read: "a chief fan snatched the cowboy flag like a purse-snatcher and ran off like a low-life coward."

In a nutshell, this old man posted a rant about his Cowboys flag being stolen at Arrowhead Stadium during the Chiefs/Titans game in December '07. The guy flipped out on camera, was incoherent and times and downright angry. 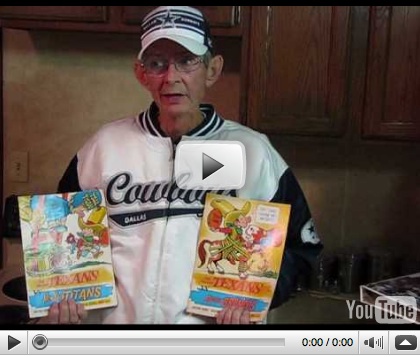 He dove into Chiefs/Cowboys history and even gave a shout out to his "friend" who is in the video after the jump. His "friend" may be the reason this video is no longer available - his account was apparently banned by YouTube for posting videos of him with strippers in hotel rooms outside of Kansas City. In Lee's Summit if I'm not mistaken.

After the jump, we've got some actual video evidence of the flag that was stolen. And frankly, after you watch it, I'm glad somebody snatched that flag. These people were asking for it. FYI, music on the video may NSFW.

Please, somebody chime in and comment on the greatness of this video that once was so I don't look like a fool. Also, this is a call to you guys with time on your hands today to find some copy of these videos, somewhere. It would make my week.

Actually, my week was made when Joel told me he's back in the press box this weekend. Regular season baby!