Share All sharing options for: Don't Rush to Judge the Chiefs Offensive Line 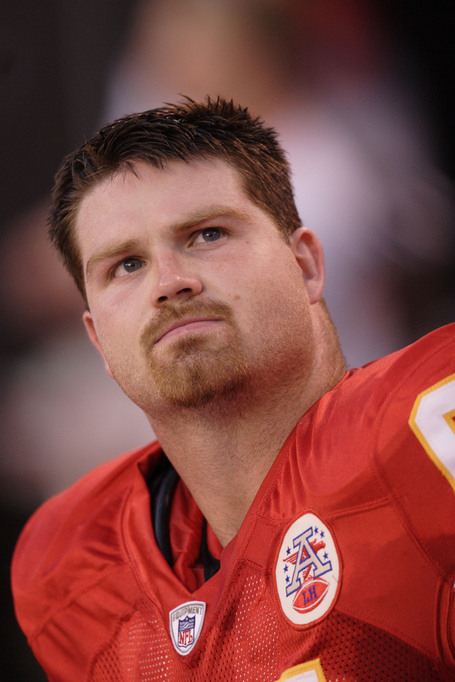 It's been the contention of most analysts - both paid sportswriters and raucous fans - that the offensive line is the primary weakness on this Kansas City team. Of course, there are many issues of need on an 0-4 team, but it seems that the few bright spots the Chiefs have don't even have a chance to show themselves because the line fails to give them enough time to pass or open holes and lanes for the running game.

I will say this, just to remind us all: Waters has a Pro Bowl past and is the veteran anchor we were all most excited about - issues with the front office or not. Branden Albert was one of the most heralded rookies last year and made a wonderful transition from guard to left tackle, one of the most difficult positions in the NFL. In fact, if not for fellow rookie Ryan Clady, I have a feeling the attention on Albert would have been overwhelming. So the left side of our line should actually be one of the best in football.

Think also about the state of our most recent competition. Who are the top three blitzing and/or dangerous defenses to go up against in all of football? I would say:

Who did the Chiefs play in three of their first four games?

Even the Raiders are strong in this area, adding the talented Richard Seymour in a surprising pre-season trade. The DE makes life hard for whoever he goes against. And let's not forget the free agent signing of Greg Ellis, whose pass rushing abilities not only are still evident for the Raiders (4 sacks in 4 games), but just look at what DeMarcus Ware - the reigning sack champion - is doing without the talent of his former teammate, Ellis: 0 sacks, 13 tackles and easily the worst season of his career in the making.

Certainly, NFL caliber players should be able to play well at any period and proper coaching and game-planning should make adjustments when necessary. But that's another topic for another time. If anything, we shouldn't rush to judgment on the state of our offensive line until the bye week at the very least. And because we're all in this for the long haul, I'd rather see O'Callaghan, Niswanger and Goff (or Alleman) get the rest of the starts of '09 just so we completely know what we have in house before our first full off-season with Scott Pioli and Todd Haley.