Share All sharing options for: No Fine for Chiefs S Jarrad Page's Hit in Giants Game 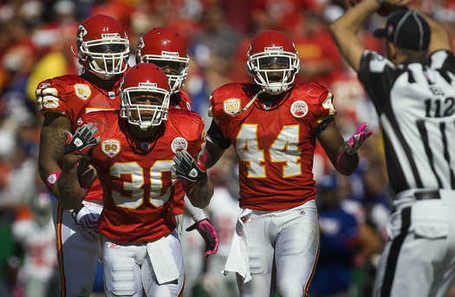 Moments ago, I received an email from the league office alerting me that they wouldn't disclose the status of a possible fine for Kansas City Chiefs safety Jarrad Page until Friday afternoon.  The decision, however, has already been made according to the player.

Page told reporters (via the KC Star) that the NFL has sent a letter to the Chiefs apologizing for an errant call in Sunday's game against the New York Giants.

On second and five with 13:45 to play in the second quarter, Page was hit with a personal foul for a helmet-to-helmet hit on the Giants' Steve Smith.  The penalty moved the Giants all the way to the Chiefs 25 yard line and gave them a fresh set of downs.

Replays showed, however, that he clearly used his shoulder, and not his helmet, to make the play.

"It doesn't do us any good now," Page told reporters.  And it didn't do them any good then as Eli Manning went on to hit Smith for a 25 yard touchdown pass on the very next play.

Head coach Todd Haley was asked about the penalty on Monday and his response was predictable (seeing as how he's not in the game of being fined by the league for criticizing referees).

"I’m getting ready for the Dallas Cowboys," Haley said.  "That does me no good one way or the other, right or wrong. We’ve got to figure out a way to beat the Cowboys."

He did say it was a "tough call" and it's difficult "because defensive backs are taught to be physical and aggressive."

(H/T upamtn for the link)