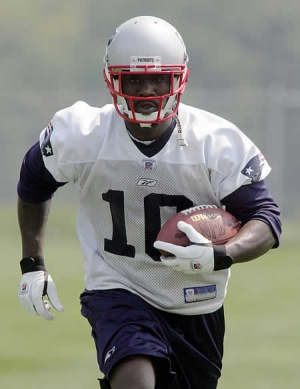 Last month we told you about the Kansas City Chiefs working out former top ten draft pick David Terrell.  Head coach Todd Haley was the Chicago Bears receivers coach when he was drafted in 2001.

Terrell, Chiefs quarterback Matt Cassel and Patriots quarterback Tom Brady, among others, worked out over the summer so it's possible and/or likely that Cassel vouched for Terrell according to Brad Biggs of the National Football Post.

He previously spent time with the Patriots so he's got a Scott Pioli connection.

Biggs reports that the Chiefs brought him in for two workouts within about a month's span.  A source told Biggs that he looked good and, if it weren't for the Minnesota Vikings releasing Bobby Wade and the Chiefs subsequently signing him, Terrell had a good shot to land with the Chiefs.

He says his attitude is different than it was in Chicago, where he felt the organization was against him.  He had the physical tools, and is regaining them now, but the attitude wasn't quite there.  In fact, he led the Bears in penalties while in Chicago.

The only workout for Terrell and the Chiefs that has been reported came on August 3rd when he was in along with receivers Amani Toomer and D.J. Hackett.  A poll we conducted at the time showed only 10% of voters wanted Terrell over the others.

If any injuries occur to the Chiefs receiving corps, then look for Terrell to be a serious candidate for the Chiefs 53 man roster.