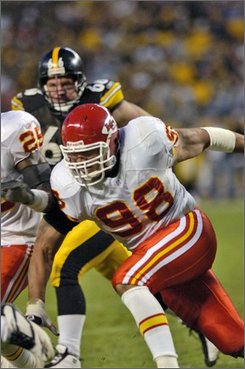 Last week, we relayed the words of Tim Grunhard on 810 WHB who said the new regime at Arrowhead didn't seem to want the former players around.   At the time, I tiptoed around the topic because Grunhard is not just a former player, but also a frequent visitor of 810 WHB which makes him part of the media.  I also said I would withhold further judgment until more evidence appeared.

This morning, more evidence appeared.  Former Chief Eric Hicks expressed a similar sentiment as Grunhard.  He talked about Haley's hard-nosed tactics and said while he may be a Parcells disciple, he hasn't had the success to justify that.  Like they say, winning cures a lot of ills.

"I've heard a lot of stories out at Arrowhead these days and it's just disappointing the stuff that I hear," he said.  "I can't divulge my sources, of course, but it's just tough to listen to them and you only hope they can find a happy medium somewhere.

"I don't see the players hanging in there that much longer putting up with this stuff."

More from Hicks after the jump.

Hicks also described the atmosphere as "so toxic for success to happen."

"It's almost like a reverse polarity happens," he said of the 2009 Chiefs.  "Success gets close to the team then just vanishes away.  It seems to me that a lot of people think they invented the three point stance and they didn't.  It's just disappointing especially the way I was brought up in this town and by the coaches I was brought up with."

Success has seemed to vanish away as of late but it doesn't have anything to do with the new regime.  Last season, the Chiefs frequently held leads in the second half and somehow, someway let them slip away.  To me, this is a talent issue, not an old vs. new regime issue.

Still, though, Hicks is disappointed in the way he is now viewed by the organization.

"I remember I went over there one time," he continued.  "I've only been to the new facility one time since I was released.  I had to be escorted into the building and I spent ten years in the building.  I should be able to go into the locker room if I want.

"I'm just not used to the atmosphere and I'm just not sure how much longer this town is going to put up with it."

While it's generally important to note how former players feel, we're concerned with the current version of the Chiefs. Hicks, however, apparently has sources who are telling him about this "toxic" atmosphere (which makes him a reporter?).  He last played for the Chiefs in 2006 so it's possible his sources are current players with the club.

I'm not sure what, if anything, will come out of these former players speaking out against the new regime in Kansas City but it's clear as day that it's taking folks a while to get used to the 'Patriot Way' that's being instilled inside Arrowhead.  However, the only way this becomes a true model of the 'Patriot Way' is whether the wins come with the secrecy.

You can listen to the entire segment courtesy of 810 WHB.