Doesn't Sound Like Chiefs Will Pursue Tauscher, Other RTs...For Now 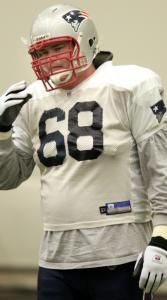 Ah, Transaction Tuesday.  For a struggling team such as the Kansas City Chiefs, and a front office who has proven to be one of the most active teams in the NFL personnel-wise, this is an exciting day.  Last week the Chiefs made eight roster moves within 24 hours.

(Photo Source: When will we get a picture of Ryan O'Callaghan in a Chiefs uniform?)

What will today bring?

"Our right tackle yesterday, Ryan (O’Callagahn) was a bright spot," Haley said of O'Callaghan after reviewing the game tape.  "I kind of like that guy. He competed and going against some pretty good competition. He showed some signs that he might want to stick around."

If you've been following the new regime in Kansas City, then you know that's about as big of a compliment that Haley gives.  He rarely mentions players by name and even more rarely publicly recognizes a good performance.  He even said the NFL's best punter, Dustin Colquitt, needs to get better.

Josh Looney of KCChiefs.com said that it appears O'Callaghan has "staying power."

O'Callaghan was moved to the first team eight days ago and when asked about the promotion, Haley cited the mental aspect of the former Patriot's game.

"I think he knows who to block," he said.  "That’s real important around here right now, as it always is, but probably most important now. He’s been in there and made very few mental errors. He’s a big guy who’s got some experience under his belt. He looks like he’s excited."

The Chiefs head coach sounds enthused enough with O'Callaghan to displace, for now, the idea of signing Mark Tauscher.  I don't have any inside information on this but to me Haley's words indicate that a Tauscher signing is not imminent.