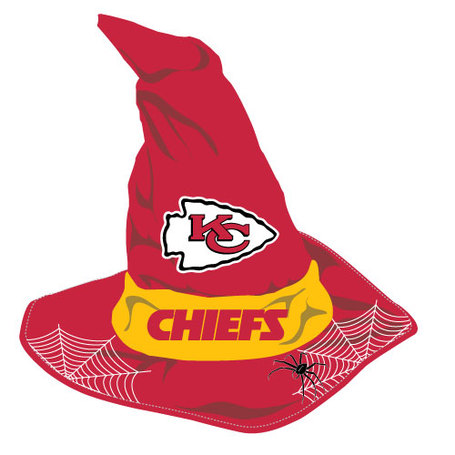 Boo! Happy Halloween APers. Have fun & stay safe today. Probably the least scary news this weekend is the fact that the Chiefs are not expected to lose. My liver rejoices.

While the Chiefs enjoy the weekend off, the rest of the AFC West plays on Sunday, so we thought it would be a good time to step back and take a look at the division.

There’s no way to consider the Chiefs part of a race for the AFC West title this season. Certainly, no way unless pharmaceuticals are involved. They are 1-6, Denver is 6-0. The Broncos could collapse, but the Chiefs would have to enjoy one of the greatest team comebacks in league history to get involved.

So consider this more of an assessment of the rest of the division and an indication of just how far the Chiefs are going to have to travel to get back to contender status. Right now, it looks like a long, long road.

Chiefs players packed up Thursday and went their separate ways for a long weekend free of football and distractions, but they took with them a warning. And perhaps the undisturbed locker in the heart of the locker room delivered it best: Don’t forget that good judgment and smart choices are part of the job.

The players walked past running back Larry Johnson’s locker after practice, before setting off on their bye-weekend plans. Coach Todd Haley gave them three days off before practice resumes Monday. Linebacker Mike Vrabel said he’s going to Ohio. Cornerback Brandon Flowers posted on his Twitter page that he’s throwing a party in south Florida.

Whatever they do, the Chiefs hope that their teammate’s mistakes aren’t buried too deeply in their minds.

Chiefs can learn from LJ’s mistakes from KC Star

The Texans-Chiefs franchise is celebrating its 50th season of play in 2009. This is another look at the founding team of the American Football League and its first season of play.

The Texans stopped their three-game losing streak by going on the road and beat the Denver Broncos 17-14 on Sunday, October 30, 1960. A crowd of 13,102 turned out at Bears Stadium in Denver to watch the contest.

It was also the breakout game for one of their best players in that first season: rookie RB Abner Haynes out of North Texas State. From this game on, Haynes became the focal point of the Texans offensive attack and combined with his duties as a punt and kick returner, the Dallas native established a legacy in the franchise’s very first season.

At issue, of course, is what the Chiefs did with the recalcitrant Johnson, and what they did was suspend him two weeks' pay and a roster bonus for one game -- or approximately $600,000. That is a stiff price to pay for "conduct detrimental to the club," but it might have behooved Johnson to consider that before making stupid, insubordinate and insensitive comments.

The day before a new hate-crime bill became law, Larry Johnson — a star running back with the Kansas City Chiefs — issued a public apology for uttering the kind of hateful words that too often give rise to a hate crime.

The bill, which President Barack Obama signed Wednesday, makes it a federal offense to commit a violent act because of a victim's race, gender, disability, sexual orientation or gender identity. At the signing ceremony, Obama said: "We must stand against crimes that are meant not only to break bones, but to break spirits — not only to inflict harm, but instill fear."

Johnson was probably trying to break someone's spirit when he used an anti-gay slur during an exchange he had on Twitter while questioning the credentials of Chiefs head coach Todd Haley. The following day, he used the same slur in lashing out at a reporter who tried to interview him in the team's locker room, the Kansas City Star reported.

Slurs deserve more than slap on wrist from The Baxter Bulletin

Well, they turned over every rock. They followed every lead. They have searched far and wide. They used to have a PRIEST on their team and most recently added a POPE (Leonard). How about some Divine Intervention. Please....

One might say that If the Dallas Cowboys are "America's Team", maybe the Kansas City Chiefs are "God's Team"

If so, God certainly has a wicked sense of humor.

Can God Save the Kansas City Chiefs? from Bleacher Report

There is not a single openly gay male athlete currently playing professional football, baseball, basketball, hockey, soccer, tennis or golf, Outsports.com president Cyd Zeigler Jr. told me. Not a one. There are several female athletes who are openly gay, and some male athletes have come out after retirement, but never has a man come out while he's active in the leagues, Zeigler said. (The only openly gay pro athlete Ziegler could think of is lacrosse player Andrew Goldstein, though I don't know if he was taking figure skating and such into account.)

As part of the JCPenney Van Heusen Pro Football Hall of Fame Fan's Choice campaign, I had the opportunity to interview Hall of Fame K Jan Stenerud. He will be at Lambeau on Sunday to participate in a Q&A session, alongside fellow HoF members Paul Krause and Bart Starr. He couldn't have been nicer on the phone and it was a pleasure to speak to him.

He spent most of his career in Kansas City and he joined the Chiefs the year after they lost to the Packers in the Super Bowl. He was let go after the 1979 season, and joined the Packers in 1980. At the time, the Packers had already gone through two other kickers that season, so bringing in a reliable veteran was a great move. He only attempted 5 FGs in 1980, but in 1981 he was nearly perfect, hitting 22 of 24 FG attempts.

My Interview With Jan Stenerud from Acme Packing Company

There was a time, back when Brett Favre was a Green Bay Packer, when it seemed possible every team in the NFL might go 8-8. Now it's possible that St. Louis, Kansas City, Washington and Tampa Bay won't win eight games combined.

The best thing about this week's NFL schedule is the Bucs, Chiefs and Redskins are off. For Skins coach Jim Zorn, that means he can do what owner Daniel Snyder and his right-hand man, Vinny Cerrato, have instructed him to do -- watch the game like everyone else.

NFL Forecast: League has become land of the have nots from Standard.net

80bobbywade I just launched my new official website at www.bobbywade80.com. Check it out and let me know your thoughts.

almighty31 im hungry. need some food. wat should i get? pizza or somethin healthy

almighty31 im wonderin y i cant b tamed. u tell me. lol

kb_kcstar What is that unusual face Haley is making? Not sure I've seen it. RT @hayden2004 @kb_kcstar u might like this http://happyhaley.ytmnd.com/

jengaffney: Why do the Chiefs wear those hideous mock turtlenecks in their team photos? May as well put embroidered holiday sweaters over them.