LJ Grievance Filed, But No 'Settlement' Progress with the Chiefs

Share All sharing options for: LJ Grievance Filed, But No 'Settlement' Progress with the Chiefs 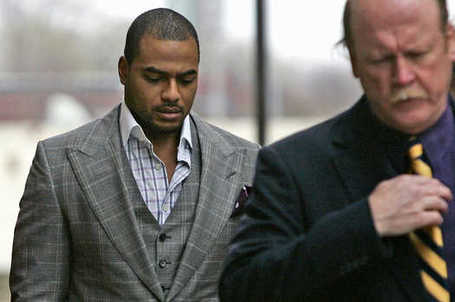 Steve Wyche of NFL.com reports that Larry Johnson has indeed filed a non-injury grievance with the Kansas City Chiefs.  It had previously been reported that the grievance would be filed sometime today.

This may or may not mean anything (How's that for insight?).  Here's what I mean:

LJ and the Chiefs are currently involved in talks about some sort of settlement as reported by Kent Babb of the Kansas City Star last night.  The Associated Press reports this afternoon that LJ's agent, Peter Schaffer, said there has been no progress on those talks.

If a settlement is completed before the grievance hearing, which is reportedly expected to be expedited to as early as Tuesday, then the hearing would not matter.

If a settlement is not completed before the grievance hearing, then an independent arbitrator would hear the case and act as the judge and jury.

Wyche also reports via a league source that LJ does not want to miss the $600,000+ in game checks.  He also wants to play, the source told Wyche.

The NFL and the NFLPA are currently involved this as well. Per Gregg Rosenthal of PFT, the union and the league are viewing this as a precedent-setting case, as it's the first Twitter suspension, and don't want to give either side any leverage months before talks of a new CBA heat up.

Here are the issues for each side via PFT:

"For example, the league could lose the hearing outright," Rosenthal writes.  "There are potential first amendment questions that could be raised.  Essentially, how far can a team go in restricting what a player says in the current collective bargaining agreement?

"From the union's perspective," he continues, "Larry Johnson's long history as a turd could influence the outcome.  Johnson has been suspended by the league before, so he could be viewed as a repeat offender.  The union risks losing a precedent-setting case because the player whose rights they are trying to advance is a royal pain."

So, it's not an issue between just the Chiefs and LJ.