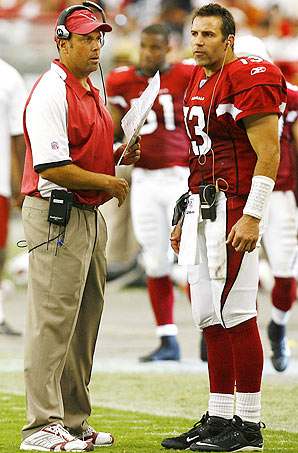 Apparently Kansas City Chiefs head coach Todd Haley still keeps in contact with his former pupil, Arizona Cardinals quarterback Kurt Warner.  This isn't too surprising as these people do, you know, have a life outside of football and can actually develop non-football relationships.

"You know we text quite a bit," Warner told XTRA 910 in Phoenix (transcription courtesy of the folks at Sports Radio Interviews).  "We haven’t had a chance to talk after this most recent incident that went on with Larry Johnson.But we do text all the time and we do talk when we have the chance."

Warner noted that Haley is indeed frustrated, as the coach has told the local media before.  He also said that Haley did have expectations to win when he entered his first head coaching job.

"With the success we had last year," Warner continued, "and wanting to go in and knowing his competitive nature… He wanted to win now but I also think he understands that this is a process and he is trying to take it all in and trying to learn how to handle the situation from a head coaching perspective which doesn’t happen overnight."

It doesn't happen overnight...I think I've heard that enough times in the last six months to make me sick but ultimately it is true.  As Warner points out in the interview, Haley is learning on the fly as much as some of the players that are being asked to change their offensive or defensive scheme.

Warner hasn't talked to Haley since the LJ incident happened last weekend but says it's unfortunate that one bad apple can ruin the whole tree.

"Unfortunately when you have a few guys that go the wrong direction, it sets everything back," he said of the Larry Johnson incident.  "So hopefully whatever happens with the Larry Johnson situation that it turns out to be for the betterment of the team one way or another and make them move forward and start making strides to building something there."