Share All sharing options for: Report: LJ, Chiefs Working on a 'Settlement' 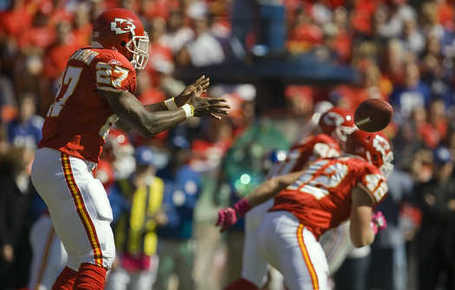 Kent Babb of the Kansas City Star has been all over this Larry Johnson story.  Tonight he reports that LJ and the Chiefs are "working on a settlement to decide the running back's future."

The Star spoke with LJ's agent, Peter Schaffer, and asked if the settlement meant his client was leaving the Chiefs and he responded, "Not necessarily."

Per Babb, the settlement talks could push back LJ's appeal which was reported to be filed today.

"Schaffer said Johnson's side is working on an appeal of the two-week suspension the team handed down Wednesday for detrimental conduct," Babb writes. "Schaffer said Wednesday night that he hoped an appeal would be filed early Thursday, and it's possible that settlement talks could delay that appeal."

These talks could lead to LJ eventually being released from the Chiefs or remain on the team in some capacity that would benefit the Chiefs.