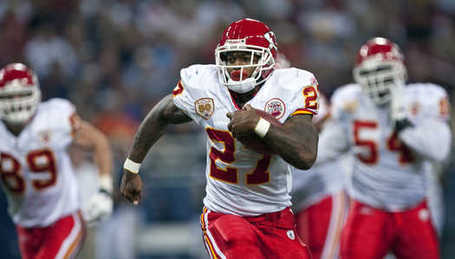 Somewhere under the bad boy façade he loves to wear, Larry Johnson is a very intelligent young man.

So why does he keep doing stupid things?

There are dozens of coaches, counselors, psychologists, friends, teammates and family members that have pondered this subject for years. They haven’t come up with any answers.

As The L.J. Turns … Thursday Cup O’Chiefs from Bob Gretz

Jamaal Charles and Kolby Smith split most of the practice time Wednesday as the Chiefs’ running backs, both of them trying to prove they’re ready for a more significant role.

Charles caught passes during practice, and Smith tested his surgically repaired knee at the team’s indoor facility. Both appeared capable of handling a greater load.

"If they need me," Smith said Wednesday, "I can be used."

Darvin Wallis was unknown to most Chiefs fans during his 19 years working for the team. But believe me when I tell you he was one of the most remarkable men to ever pass through the doors of Arrowhead Stadium.

Wallis passed away over the weekend in a family cabin in Colorado. Details are sketchy at this point but he apparently died in his sleep. He was 60 years old.

He was in Colorado when he died in his sleep. The cause of his death is unknown.

Wallis accompanied Marty Schottenheimer from Cleveland to Kansas City in 1989 and worked behind the scenes for Schottenheimer, Gunther Cunningham, Dick Vermeil and Herm Edwards as a defensive assistant/quality control coach for 19 years before retiring in January 2008.

On Monday, Kansas City Chiefs running back Larry Johnson apparently uttered a homophobic slur in the presence of the media. The statement came hours after he directed a shorter version of the same term at one of the followers of his Twitter page.

By Monday night, the NFL was investigating the situation.

By Tuesday, the Chiefs suspended Johnson indefinitely — while curiously going out of their way to not call it a suspension.

In contrast, Raiders coach Tom Cable, defensive assistant Randy Hanson, and three other assistant coaches emerged from a meeting room in early August. One of them, Hanson, had a broken jaw and he claimed Cable was responsible.

To date, the league has yet to send someone to Oakland to meet with each of the five men in an effort to find out how and why Hanson's jaw became broken.

With such a harsh punishment, I'm surprised the Chiefs didn't use King Pink's full name, "Larry Alphonso Johnson Jr," in the news release.

It didn’t take long for Johnson to fire back. Johnson and his agent, Peter Schaffer, intend to appeal the suspension per Mike Florio of Pro Football Talk.

It all boils down to one truth – this could get ugly.

Why? First off, it doesn’t appear that Johnson is truly sorry for his actions. Coming not even 36 hours after his half-hearted, canned apology, his appeal indicates a belief that he doesn’t deserve to be punished. But being banned from Arrowhead for the bye week is no punishment. More than likely, Larry is thrilled to be as far away from Arrowhead Stadium as he possibly can.

So, it’s only fair that the Chiefs suspend him and go after some of his money. That’s what Johnson cares about more than anything, according to his own Twitter comments:

LJ vs The Chiefs: Will It Get Ugly? from WPI

No player tweets today (was there a memo?).

JPosnanski KC Chiefs have suspended Larry Johnson for 2 weeks. Wonder how they came up with 2 weeks? Do they have a punishment chart for Twitter Rage?

jstickley: So the #Chiefs suspended LJ. I say they should cut him outright, if only to keep the team rushing record as-is, with Priest. Class matters!!

zergbane: Larry Johnson (KC Chiefs) learned a lesson today. You don't use slurs when you average 2.7 yards a carry. 2006 would have been different.

Hank_Layton: How bout the Chiefs getting a name drop on South Park tonight? Hell yeah. It was a hilarious episode, too!

my331: Why did it take me just now & three months 2 realize my history professor is the same guy that played defensive end 4 the KC Chiefs

tiffieluv87: NFL random fact: Did u know that the KC Chiefs have lost 10 consecutive home games? How would u like 2 be a season tix holder there? All bad

Here's a link to the South Park bit.

clintandrewhall: Apparently, the KC Chiefs could secure a win if the Japanese rush the field: http://bit.ly/KLCNR (at 2:35)