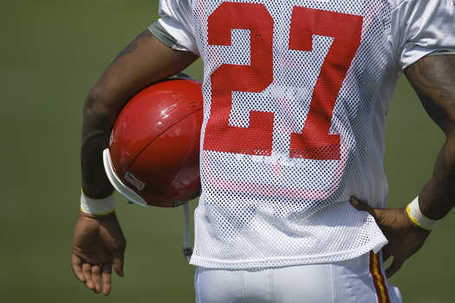 Peter Schaffer, agent for Kansas City Chiefs RB Larry Johnson, does not like the decision by the Chiefs to suspend without pay one of his clients.  After news broke earlier tonight that the Chiefs would suspend LJ, costing him two game checks and over $500,000, Schaffer told PFT that they will be filing an appeal as early as tomorrow morning.

"It is our belief that the action did not warrant the discipline unilaterally imposed by the Chiefs," Schaffer said.  "We'll be asking for an expedited hearing, and hopefully we can work out a positive, mutual resolution with the Chiefs.  If not, we'll defer to the arbitrator's decision."

This quote from Schaffer might indicate that LJ is not purposely trying to be released, as some have speculated.

"Larry's desire is to get back to his teammates as soon as he can."

Schaffer wants to get his client in good graces with the Chiefs because he knows LJ will never see that type of money again.  That's my belief.  It's a good move, too, and something LJ should have known.

How much will LJ lose if the suspension is upheld?

These types of appeals are heard by an independent arbitrator.  If the NFL had issued the suspension, then the Commissioner's office would be hearing the appeal.

(H/T nycchief for the link in the FanShots)