Share All sharing options for: Marty Doesn't Think Any Team Would Take LJ 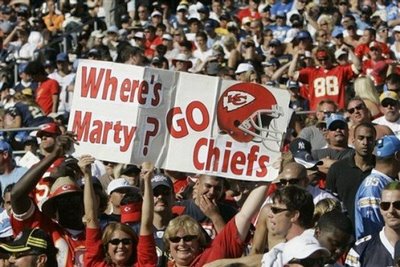 In short, Marty doesn't think one of the other 31 NFL teams would take a chance on him.

Quotes after the jump.

"Maybe he thinks that he can force his way out (of Kansas City)," he said. "Let me ask you this, of the other 31 teams in the National Football League, who in the world is going to bring him into their locker room?"

That's a very good question that I think LJ has forgotten.  A soon-to-be 30 year old running back isn't any more desirable by GMs if he has the baggage that LJ does.  How is he any different than Shaun Alexander or Edgerrin James?  Their skills appear to be declining to a similar level and LJ has a history of calling out the coach to go with it.

"Whether they’re losing or, certainly they won’t if they’re winning. But, to me, the guy doesn’t have the skill level to warrant the kind of b.s. that they’re putting up with out there and I would not be surprised to see them run him right out of town."

Schottenheimer also said he believes LJ will receive at least a one game suspension.

It should be noted, however, that Schottenheimer once spent a third round pick on Tamarick Vanover (and signed Bam Morris).