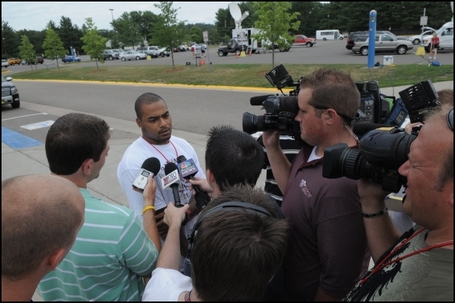 Kansas City Chiefs running  back Larry Johnson has released an apology for his actions over the last 48 hours.

We all know the story by now. LJ posted on his Twitter comments appearing to be critical of Chiefs head coach Todd Haley.  He then used a derogatory term in reference to a fan.  He again used that slur towards reporters the following day.

Here is the official statement from LJ (via Kent Babb of the Kansas City Star):

"First of all, I want to apologize to the fans of the Kansas City Chiefs and the rest of the NFL, Commissioner Goodell, the Chiefs organization, Coach Todd Haley, his staff, and my teammates for the words I used yesterday. I regret my actions. The words were used by me in frustration, and they were not appropriate. I did not intend to offend anyone, but that is no excuse for what I said.

"I also want to apologize to all the kids who view athletes as role models. I was not a good role model yesterday and hopefully I can become a better role model. We all make mistakes, and the challenge is to learn from them. I will do my best to learn from this one as I move toward becoming a better person, teammate, and member of the Kansas City Chiefs team and community."

Maybe I would buy part of this apology if yesterday's incident didn't happen.  On Sunday night, LJ posted a slur on his Twitter page.  He slept on it for a night, came into the facility the next day and AGAIN used that slur to reporters with microphones.

Sorry, LJ.  Been there, heard that.