Chiefs Brass Has History of Dealing With These Problems

Share All sharing options for: Chiefs Brass Has History of Dealing With These Problems 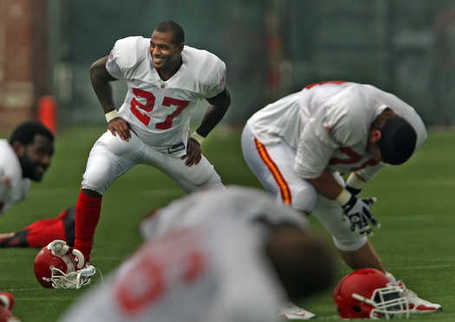 In the Scott Pioli era, the Kansas City Chiefs have reacted appropriately and relatively quickly to off-the-field trouble.  This is one of the reasons I expect a decision, whether it be a suspension or an out-right release, on Larry Johnson to come down by next week.

The Chiefs have had two players arrested under the Pioli regime:

Michael Merritt: On February 5th, news breaks that Merritt was arrested for marijuana possession.  (I can't mention this without repeating Merritt's best line to a police officer: "All this for a little bit of weed?")

David Macklin: On March 13th, reports surface that Macklin was arrested for DUI.

5 days later he was released.

The Chiefs have also had another release due to violation of NFL rules:

Vince Redd: On August 24th, the Chiefs released linebacker Vince Redd.  Later that night we learn that he had tested positive for a banned NFL substance.

These are three situations that the Chiefs have acted on.  LJ's situation is kind of unique since he technically hasn't broken any laws (neither did Redd).  However, he is possibly in violation of the personal conduct policy which may as well be the law as far as NFL players and teams are concerned.

The Denver Broncos WR Brandon Marshall acted immature and disrespectful in practice and he was suspended by the team.  LJ's situation isn't much different.

CBS Sports Clark Judge has an idea of how the Chiefs should react.

"So make this quick and decisive," Judge writes. "Someone needs to step in here and remind Larry Johnson that he is wrong for what he did and how he did it. I don't care that he's frustrated. I don't care that his offensive line can't open holes for him. I don't care that he's not the back he was two or three years ago. I don't even care that the Chiefs can't win. What I do care about is that he behaved in a reprehensible way, daring someone, anyone, to do something about it.