Chiefs C Niswanger Has Some Sort of 'Significant' Injury

Share All sharing options for: Chiefs C Niswanger Has Some Sort of 'Significant' Injury 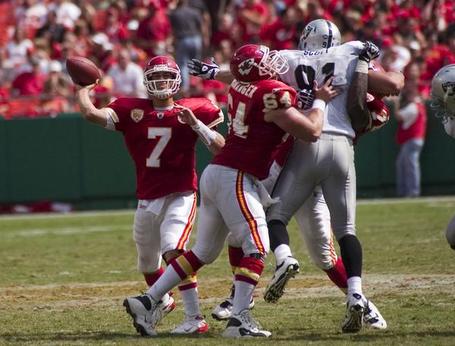 Kansas City Chiefs center Rudy Niswanger injured his knee on a fourth down quarterback sneak in Sunday's loss to the San Diego Chargers.  He was helped off the field and eventually taken away to the locker room in a cart.  As he tried to walk, even a couple of steps, you could tell he was in pain.

Head coach Todd Haley confirmed after the game that it was a knee injury.

"Rudy is having his knee looked at as we speak," Haley told reporters yesterday, "and we will know more about that injury later. It’s a significant injury of some sort but, hopefully, less significant than we initially thought."

The Chiefs are coming up on a bye week so if the injury is on the "less significant" side of things Niswanger will have two full weeks to heal.

"I can’t guarantee that," Haley said when asked if he could play at Jacksonville on November 8th, "but it didn’t look great initially."

Wade Smith, who was filling in for Branden Albert at left tackle, moved to center when Niswanger went down.  If Niswanger is out for any extended period of time, Haley feels the team has options.

"Andy Alleman has played center and we have a practice squad player who has played a lot of center," Haley said.  "We have some center options, Wade being one of them."

That practice squad player is Darryl Harris, who started nine games at center for the Ole Miss Rebels in 2005.  The following years he played mainly right tackle and left guard but filled in at all spots on the offensive line.

If Niswanger is down for an extended period, then here are your center options: Wade Smith, Darryl Harris, Andy Alleman and/or some free agent.