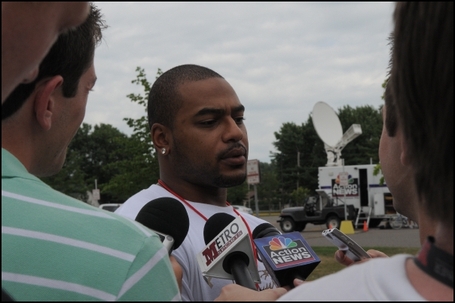 Larry Johnson's agent, Peter Schaefer, started the damage control last night by talking with ESPN.com's Bill Williamson.  If you'll recall, Williamson was the reporter in a July ESPN.com article when LJ said he was back on board with the new Kansas City Chiefs regime.

This quote was posted last night but I wanted to be fair about the situation and make sure everyone saw it.

"I talked to Larry about it and he was focusing more on pumping up his father than anything else.  He wasn’t trying to downgrade anyone … yes, everyone is frustrated after a loss like this but I wouldn’t put too much into it."

The idea that this was NOT a shot at Haley and instead a compliment to his father is what I figured the sensible folks in LJ's camp would say.  Schaefer seems like a pretty smart guy.  It's fairly obvious that LJ is frustrated, as evidenced by the following tweets that included condescending and homophobic slurs, and those comments about Haley were likely a result of that frustration.  That doesn't make it okay and it doesn't make it right.

Unfortunately for LJ, his past actions have given him a reputation in Kansas City and he no longer gets the benefit of the doubt.  He should understand what the public thinks of him, and what he's done in the past, and understand that any comments like this would be viewed as trying to downgrade Haley.

I'll get into some history behind LJ and his agents around 9:00 AM today but I wanted to make sure everyone was aware that someone from his camp has downplayed the comments.