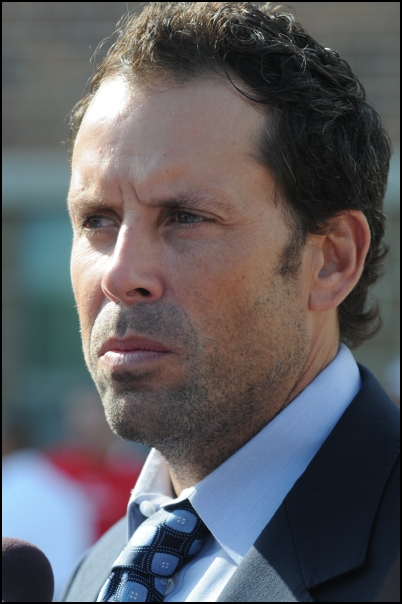 The tweet has since been deleted (but a screen shot can be seen here).

The comments are disturbing enough but they're taken to another level once we understand how head coach Todd Haley feels about being referred to as a golf coach.  Kent Babb of the Kansas City Star details some of this.

"Haley wants to be known as a successful football coach," Babb writes, "and his background as a golf coach and golf pro isn't something he likes discussing. He has told me several times that it's just something in his past, and he'd just as soon leave it behind.

Haley's background is not in football.  He went to college on a golf scholarship and did not college, professional or even high school football. He did not get into the game until his late 20s.  His father, though, is a long-time personnel guy in the NFL so he's got an intimate knowledge of the game because of that connection.

Babb continues, "It's hard enough for those NFL players, proud as they are, to respect a rookie head coach who hasn't brought much winning with him to Kansas City.

"Then add that non-traditional background, that he is a young head coach at 42, and his attitude toward players is understandably difficult to adjust to. It makes sense that he'd like to quiet his career's detours, and knowing how conscious Haley is of that fact, it's even more revealing to me that LJ hit Haley tonight where it hurts."

This went from publicly criticizing your coach to taking a personal shot at him.  For some reason, I don't think this will sit well with Haley.

The Chiefs coach has said on multiple occasions that he wants players who want to be in Kansas City.  Well, this is about as obvious as it gets - LJ does NOT want to be here.