A History Behind LJ's Public Comments About the Chiefs

Share All sharing options for: A History Behind LJ's Public Comments About the Chiefs 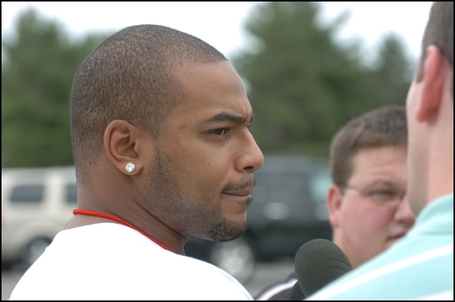 This situation with Kansas City Chiefs RB Larry Johnson and his war of words with head coach Todd Haley and other fans on Twitter is even more interesting once you know some of the history behind it.

Let's hop into the way-back machine of October 2008, when LJ was being suspended, Herm Edwards was the coach and the Chiefs, like they are today, were struggling mightily on the field.

Reports came out that LJ got into some sort of situation outside of a Kansas City nightclub and ended up spitting a drink on a woman and reportedly threatening to kill her boyfriend (per the police report).  Then-coach Herm Edwards deactivated LJ for several games before the league stepped in and suspended him for a game as well.

During the course of that situation, LJ's agent Alvin Keels quit.  My guess would be that it's not advantageous for an agent, who has likely negotiated the last big money contract for his client, to be associated with a player who was being suspended and acting in the manner LJ was.  That's just my guess, though. I'm not privy to the details involved in the decision.

In the locker room following the final game of the regular season, LJ told reporters that he doesn't feel Kansas City is a good fit for him and it's time the organization move on.

In early February of this year, the agent-less LJ appeared on 610 Sports and the exchange was strange to say the least.  the interview started with a quote from Scarface and he went on to tell the listeners that he again didn't feel like Kansas City was a fit and he did not like to go outside in the city.

LJ was quiet for much of the remaining offseason.  That is until he hired agent Peter Schaefer and, with a contract dispute looming, told Bill Williamson of ESPN.com in July that he was back on board and was happy with the Haley/Pioli regime.

LJ hasn't said much since that incident.  There was one post on his Twitter account that just repeated the word "ego" multiple times.  He was also asked in the locker room after the Giants game (when the Chiefs were also blown out) about some of the playcalls and only responded with "ego" again.

And now we sit here today with LJ's comments from the last 24 hours.

I should have known.  I thought with LJ hiring Schaefer the public comments would stop and he would understand that the rest of the NFL is watching when he does and says these things.  And every team in the NFL is now going to be even more wary of LJ if/when he hits the open market.